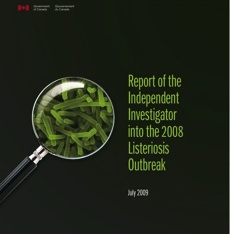 Sheila Weatherill, the federal government’s lead independent investigator into the August 2008 Listeriosis outbreak, released her final report to the public on Tuesday.

The report follows a six-month probe into what led up to the listeriosis outbreak, which centred on meat products produced by Maple Leaf Foods, and how the outbreak was subsequently handled. To read the report, visit: http://www.listeriosis-listeriose.investigation-enquete.gc.ca/index_e.php or click the link below.

What the report found was a lack of a coordinated response among various governments. The report says “it took close to three weeks before senior executives in all key organizations became fully engaged in the event.”

As well, Canada’s Foodborne Illness Outbreak Response Protocol wasn’t recognized as the protocol to be used.

Among other findings, the report says Maple Leaf Foods didn’t initially report the presence of listeria at the plant or provide product distribution records.

And the Public Health Agency of Canada didn’t consider it had the federal leadership role, therefore there was a delay in identifying the outbreak as a public health emergency.

As for Health Canada, because it was summer, its Health Risk Assessment team was not operating on a 24/7 basis, leaving gaps in coverage.

The report makes 57 recommendations, ranging from:

• product labelling to ensure at-risk groups, such as seniors and pregnant women, are aware of safety threats from ready-to-eat meats

• clarifying the weight of evidence needed to recall food products

• improving how the federal, provincial and territorial organizations collaborate on food safety.

There was also a list of recommendations for meat processors specifically.

• that the CEO and senior management of all meat processors should accept oversight responsibility for ensuring that food safety is fully embedded in every level of their business.

• that the CEO and senior management of all meat processors should ensure effective design and actively promote all aspects of food safety consistent with their Food Safety Plan.

• all meat processors should ensure that new and existing equipment is and remains appropriate for the intended use.

• sanitation methods should be validated and implemented by meat processors in consultation with the equipment manufacturer, with a particular focus on the intended use and the products being processed on each piece of equipment.

To read the report, visit: