Retailer puts fruit and vegetable waste to good use 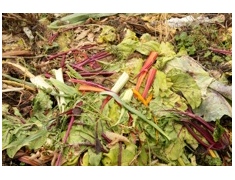 Loblaw Companies Limited has announced an agreement with StormFisher Biogas of London, Ont. to put its fruit and vegetable waste to good use. Both companies announced last month that all organic trimmings produced at Loblaw corporate grocery stores in South Western Ontario will be transferred to StormFisher’s new renewable energy facility in London.

The agreement will also see StormFisher provide Loblaw with an additional location to convert its organic trimmings to renewable energy.

Loblaw becomes the first grocery retailer to work with StormFisher to have its organics used to generate electricity.

The 47 Loblaw stores, which are located in the Windsor to Waterloo corridor, are expected to provide organics that can generate the same amount of electricity as is consumed by approximately 225 homes annually and reduce more than 300 tonnes of CO2 equivalent each year.

StormFisher’s London biogas facility, which is scheduled to begin operation in late 2010, will convert about 140,000 tonnes of organic materials from a number of agri-food producers into renewable energy through a process known as anaerobic digestion.

The electricity produced at the biogas plant will be sold to the Ontario Power Authority and form part of the province’s electricity supply mix.