Get Agricultured at the 2018 Royal Agricultural Winter Fair 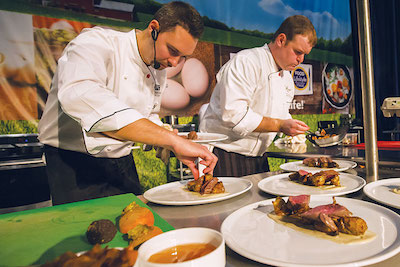 The 2018 Royal Agricultural Winter Fair comes complete with a new campaign—“Get Agricultured”—as well as a wide list of features and activities that help bring the best of the country to the city.

“Get Agricultured hits at the core of our original mandate established almost 100 years ago,” says Charlie Johnstone, CEO of The Royal Agricultural Winter Fair since 2015. “Everybody has an interest in gaining knowledge on food, agriculture and the richness of our environment, as well as the role these play in our lives. In many ways, The Royal is more relevant today than it’s ever been. Most importantly, it continues to offer education in one of the most memorable and enjoyable ways – through experience.”

‘Get Agricultured’ was created in partnership with Toronto-based agency Fuse Marketing and will be featured across all media platforms, including online and throughout the event site. The campaign includes catchy slogans such as “Stirrup some fun,” “Our kids can’t wait to meet your kids“ and “Less rat race and more rabbit jumping.”

The Royal will give life to the new campaign with its traditional line-up of activities and features including 5,000 animals, 120 agricultural competitions, artisan cheese, giant vegetables, Ontario wines and beers, live performances, spectacular art, food sampling, various restaurants and pubs and North America’s #1 indoor equestrian event, The Royal Horse Show. The Royal even features an elusive nightclub, The Tanbark Club where the fashion-forward can be seen after an evening at the Royal Horse Show. As always there is much to do for families such as Ag-Tivity Central and the renowned President’s Choice Animal theatre which offers exhibits such as Birds of Prey, Rabbit Jumping, Sheep-Herding, Medieval Times performances, Australian Horseman Guy McLean, the Toronto Mounted Police, Beginner Horsecraft and everyone’s favourite, The President’s Choice SuperDogs.

There is also no shortage of dining options. Every year, The Royal builds-out a variety of unique temporary restaurants that feature local chefs, regional ingredients and food specialties including The Royal Court Restaurant, Bullpen Saloon and Heritage Court Cafe. One of the most popular hospitality venues is The Royal Terrace, which overlooks the Royal Horse Show and features a carefully curated menu by the master chefs at Oliver & Bonacini.

“There are enough entertainment and restaurant options to plan something different each day and night of The Royal,” says Tim Lilleyman, Director of Hospitality at The Royal since 2013. “Like any successful Fair, we’ve always offered a strong base of activities. But now, with new and recent additions, the best advice I have for visitors is to plan to visit over multiple days or to book a room in a nearby hotel and visit daily.”

Other recent or new additions to The Royal Agricultural Winter Fair include:

The Burnbrae Farms Culinary Academy will offer interactive cooking classes everyday with some of Canada’s most prominent chefs including Jamie Kennedy (Kennedy Kitchens), Rob Gentile (Buca), Michael Hunter (Antler) and Alida Solomon (Tutti Matti). Available on a first-come-first-served basis, the classes will focus on seasonal, local and sustainable gastronomy, and will include very specific details on where our food comes from. Each session holds seating for just 36 participants so this is an exciting and exclusive opportunity to learn from and break bread with some of the best of the best. Some sessions will have the added feature of wine pairings and will only be available to guests 19 years and older.

Tickets to The Burnbrae Farms Culinary Academy are an additional $20 per session and can be purchased at RoyalFair.org. Classes run roughly one hour. Patrons are encouraged to sign up early to avoid disappointment as these sessions will sell out.

In partnership with Canada’s largest country music festival, Boots and Hearts, The Royal will kick off with the first stop on Tim Hicks’ “Get Loud” tour, Thursday, November 1. Fresh off his performance at the Canadian Country Music Awards, Canadian music icon Hicks will be joined by The Washboard Union, Tebey and Madeline Merlo. Available at Ticketmaster.ca, tickets start at $65.

Some 40 to 50 breweries will participate in the annual Ontario Craft Beer & Cider Awards. Held November 9, guests are able to sip and judge a variety of brews from best dark beer to best cider. Tickets to the awards are $30 and include Fair admission after 4PM. Tickets to the annual Awards are available at RoyalFair.org.

“Whether it’s farm animals, equestrian sports, unique dining experiences or music performances in truly unique settings, everyone who visits The Royal ends up loving The Royal,” says Johnstone. “Our aim is to get everyone excited about agriculture and food, whether for a day, ten days or an entire lifetime.”

Since 1922, The Royal Agricultural Winter Fair hosts a multi-day festival showcasing the best in agriculture, equine and animal competitions and exhibitions from across the country. Hosted at Exhibition Place in Toronto, the 1,000,000 square-foot space is magically transformed into large-scale, interactive exhibits.

Since July 20, members of IATSE Local 58 have been locked out of Exhibition Place by the city of Toronto.  The Royal Agricultural Winter Fair, a tenant of Exhibition Place since 1922, will once again proudly welcome competitors, exhibitors and guests from around the world as it hosts the best of the best for the 10 days of this year’s Royal.