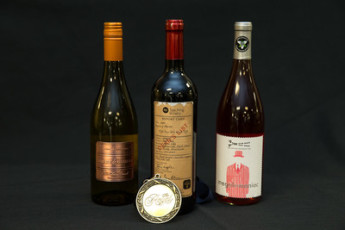 The judges at The Royal Agricultural Winter Fair’s 7th annual wine competition are raising a glass to the Niagara College Teaching Winery, as the student-run winery took home both the “Best in Show Red” and “Best in Show Overall” prizes for its 2012 Dean’s List Merlot at the September competition.

“It is a real honour to be recognized for such a prestigious wine award, particularly with consideration to the wide field of extremely high-quality VQA wines from well-established Ontario wineries that this competition attracts,” says Gavin Robertson, winemaker at the Niagara College Teaching Winery in Niagara-on-the-Lake, Ont. “I’m happy that we were able to carry this quality through to bottle, and it’s wonderful that the end product of a great growing season in the vineyard and gentle handling in the winery should be recognized as it is now.”

The winning wines will be served at dining venues at The Royal, as well as featured at various events during the fair’s 10-day run from November 6 to 15, 2015, at Toronto’s Exhibition Place.

The Royal’s wine competition, run in co-operation with the Independent Wine Education Guild, provides an opportunity for wineries to earn recognition for VQA wines made with 100-per-cent Ontario grapes.

“The quality of the wines that competed this year was high,” says John Switzer a Toronto wine writer, educator and chief judge at the Independent Wine Education Guild, who oversaw the judging panel at The Royal Wine Competition. “It was also satisfying to see the high quality of the red wines submitted to the competition, considering that many think Ontario is a place only known for its whites. This was a very positive aspect of the competition.”

The Royal Wine Competition helps raise the profile of participating wineries and Ontario’s wine industry as a whole, adds the Independent Wine Education Guild’s executive director, Paul Miles: “The more consumers know about VQA wines and get to try them, the more they learn that our wines are as good or better in many cases than top wineries from around the world.”