Exploring the onion as cancer fighter and food preserver

A Guelph research team is studying the beneficial characteristics of onions 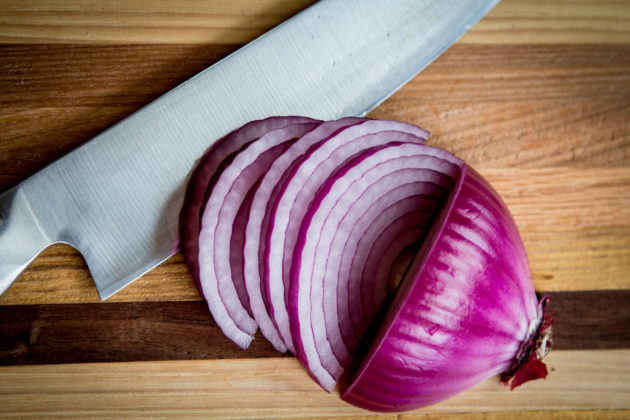 Onion On Cutting board

Countless people love onions on burgers and in salads for their taste and texture, but onions are now being studied on a whole new level as a potential disruptor and killer of cancer cells.

Thanks to research that’s showing favourable results, the use of onions may soon go far beyond the supermarket shelves to being used in nutraceuticals and as a healthy alternative to artificial food preservatives. A compound known as flavonoids is instrumental in providing colour to fruits and vegetables, and onions are particularly rich in a specific variety of flavonoid called quercetin.

Out of 28 vegetables and nine fruits, onions lead in quercetin content. Earlier studies have determined quercetin has been highly effective as an antioxidant in neutralizing cancer cells and restoring a healthy cellular environment. But until now, in-depth research on quercetin levels in Canadian onions has been lacking.

A journey to unlock the onion’s beneficial characteristics is currently underway by a University of Guelph research team (in Guelph, Ont.) under the direction of Dr. Suresh Neethirajan, the same scientist who recently co-developed a portable mechanism to rapidly detect peanut allergens in foods, as well as a hand-held device for the early detection of disease in livestock that can be used by farmers.

Canada’s onion-growing capacity is extensive and the crop has a definite presence on the global market. The nation has an annual onion production of 210,000 tons with a market value of $74 million. As the demand for antioxidants continues to grow in the food and nutraceutical industries, with forecasts reaching US$2.7 billion by 2018, onion growers stand to have a valuable cash crop.

But Neethirajan says that until now, the information needed for Canadian farmers to invest in a particular type of onion crop has been missing. “There are many onion varieties and farmers need to know which is the best to invest in a crop. From our research, the Ruby Ring variety shows the most promise in providing high levels of quercetin,” he says.

But quercetin levels are only half the equation of harnessing this important ingredient. The other issue is the method of extraction that has commonly used solvents that can leave a toxic residue in foods, which is then ingested. Neethirajan and his team have determined a way for onions to release their healthy component by using superheated (above boiling) water in a pressurized container. This method allows quercetin to be extracted in a pure form without contamination or residue and makes it viable for the nutraceutical, food and cosmetic industries to implement as a healthy natural food source.

A quest for the healthiest onion

The research team extracted quercetin from five varieties of onions commonly grown in Ontario – Stanley, Safrane, Fortress, LaSalle and Ruby Ring – using pressurized low polarity water and then subjecting the extractions to a barrage of assays to determine the level of antioxidant properties of each onion type.

The study found that the Stanley variety, a yellow onion, had the highest quercetin content, even though Ruby Ring was determined to have more health benefits. Neethirajan explains that some of the difference might have had to do with the research technique that was used of peeling the onions. Flavonoids are in greater concentration near the skin that was removed in the scientific process, including other possible factors such as cultivation and storage techniques, as well as the weather.

In this research, the Ruby Ring onion’s ability of its quercetin molecules to attract and neutralize free radicals proved the best. Free radicals in the human system can lead to cancerous cells that could develop into tumors, or increase the risk of diabetes or heart disease if left unheeded.

The flavonoid has also been used in the manufacture of anti-AIDS drugs for its ability to inhibit a viral protein. However, in another research test on onions, Neethirajan found the Stanley variety showed a remarkable effect of killing specific cells related to colon cancer, although all five varieties displayed an ability to attack the unwanted cells. “There was a 3.5- to four-fold increase in the number of cells undergoing apoptosis [cell death],” he says, “[but] the Stanley variety showed a slightly higher number of apoptotic cells compared to the other extracts.” All varieties also demonstrated a five-fold decrease in colon cancer cell multiplication.

Although Neethirajan admits it’s difficult to explain the discrepancy of onion varieties, the potential of keeping cancer cell populations from increasing and by destroying them is encouraging. “A hallmark of cancer cells is their ability to avoid apoptosis. By triggering apoptosis in abnormally dividing cells, cancer cells and metastasis can be put in check,” he says.

Ruby Ring onions also have a high anthocyanin, or phenol content that is a prime contributor to the red or purple colours in a number of fruits and vegetables. As it is another health-promoting component, anthocyanin possibly enriches the free radical scavenging properties of quercetin molecules to rank this variety of onion a “supervegetable”.

“By determining the purest method of extracting the onion’s health-promoting components is extremely important in developing biocompatible, biodegradable and eco-friendly antioxidant onion-based food products in the future,” Neethirajan says. “Onion farmers in Ontario and the rest of Canada should know just what the food industry will be looking for and be ready with a sufficient supply.”

The future looks bright for specific onions, and Neethirajan predicts there could also be a strong demand for a residue-free powder or film-forming solutions of the onion’s antioxidant components. These could then be used as a natural and readily available food preservative that would help prevent oxidation. Although flavour may have a definite impact on some foods, it could also enhance products such as certain baked goods. However, he says flavonoids have a rapid dispersion rate and therefore could possibly be used in everything from fruit juices to alcoholic drinks, as well as an important component in creams and lotions.

Currently there are more than 750 Canadian businesses involved in functional foods and natural health products that equate to about $11 billion in annual revenues. Such a profitable industry could quite possibly be the catalyst for onion farms to rapidly increase across this country’s agricultural landscape.