Craft spirits on the rise

Mintel research reveals that "craft" spirits have accounted for 15 per cent of new global spirit launches to date in 2016, up from five per cent in 2011 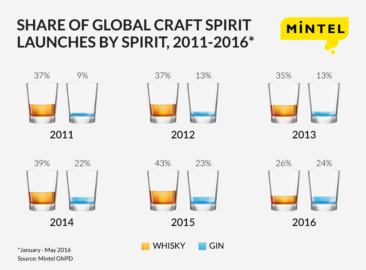 Craft beer may be all the rage these days, but there’s a new rising star in the beverage world: craft spirits.

New research from Mintel reveals that spirits positioned as “craft” have so far accounted for one in seven (15 per cent) new global spirit launches to date in 2016, up from just one in 20 (five per cent) in 2011.

Research from Mintel GNPD (Global New Products Database) reveals that overall, craft spirit launches increased by 265 percent globally between 2011 and 2015, and it seems that the U.S. has been driving the trend. Of all craft spirits launched in this time, half (49 per cent) have been in the U.S. and 42 per cent in Europe, compared to just four per cent in Latin America and 3 per cent in Asia Pacific.

According to a Mintel press release, the surge in launches of craft spirits seems to be backed globally by strong consumer demand for artisanal alcoholic beverages. Over half (55 per cent) of U.S. alcohol drinkers agree that craft alcohol brands are of higher quality than big brands, and demand is mirrored across Europe as well. Around half of consumers in France (55 per cent), Italy (53 per cent), Germany (50 per cent) and Poland (46 per cent) agree that spirits from small/craft distillers are more appealing than large, mass-produced brands; while in the UK, 37 per cent of dark spirits/liqueur drinkers are prepared to pay more for craft variants.

“Craft spirit launches are growing at a rapid pace and will continue to rise in more mature markets – particularly the US – as consumers continually seek out ‘special’ offerings. Despite being a relatively small sector of the market, craft spirits are growing in response to the huge consumer-led demand for more authentic, more distinctive, more local, less processed and more interesting spirit brands,” says Jonny Forsyth, Global Drinks Analyst at Mintel.