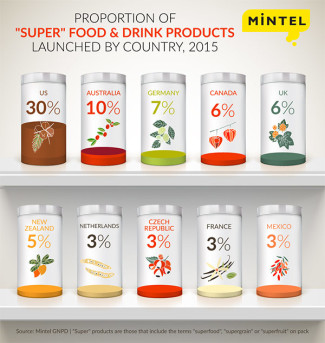 Superfoods – nutrient-packed foods that are frequently marketed as the answer to consumers’ health woes – have become super popular, according to new research from Mintel.

The Mintel Global New Products Database (GNPD) reveals that between 2011 and 2015, there was a phenomenal 202-per-cent increase globally in the number of new food and drink products launched containing the terms “superfood,” “superfruit” or “supergrain.”

In fact, in 2015 alone, there was a 36-per-cent rise in the number of food and drink products launched globally featuring the terms “superfood,” “superfruit” or “supergrain.”

According to a Mintel press release, the surge in launch activity comes as a result of “strong consumer demand for highly nutritious products.” More than seven in 10 consumers in France (72 per cent), Germany (71 per cent), Italy (73 per cent) and Spain (72 per cent) now agree that health-promoting benefits of natural foods (such as fruit and vegetables) are preferable to the added benefits of functional foods.

“The popularity of ‘super’ products is clear as food and drink manufacturers globally are tapping into a demand for these nutritionally dense ingredients. But superfoods are not only limited to food and drink as they are regularly appearing in the beauty, health and hygiene and pet food aisles as a result of today’s consumers becoming much more aware of what they are putting into and onto their bodies,” says Stephanie Mattucci, Global Food Science Analyst at Mintel.