A&W Food Services of Canada Inc. is announcing it will serve French’s Tomato Ketchup and Classic Yellow Mustard in all of its restaurants across Canada 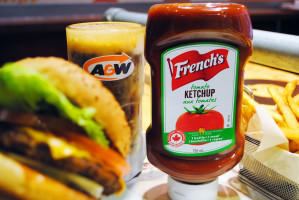 As part of a new partnership with the French’s Food Company, North Vancouver-based A&W Food Services of Canada Inc. is announcing announcing it will be the first national restaurant to serve French’s Tomato Ketchup and Classic Yellow Mustard in all of its restaurants across Canada. Both the ketchup and mustard contain 100-per-cent Canadian tomatoes and 100-per-cent Canadian mustard seeds.

The transition to French’s Tomato Ketchup and Classic Yellow Mustard is already underway, and A&W restaurant customers across Canada will be able to have the new toppings on all menu items starting in April.

French’s has been making headlines in recent months as Canadian social media users have picked up on the fact that the French’s ketchup uses exclusively Ontario tomatoes in its Canadian ketchup production. Patriotic consumers have been spreading the word about French’s use of local tomatoes, and as a result, the brand has been enjoying a higher profile and more positive image in the eyes of many Canadians.

In an A&W media release, the Canadian owned and operated foodservice company states that it’s very “proud to use locally-sourced tomatoes from Leamington, Ont. and mustard seeds from Saskatchewan in all of its ketchup and mustard — including in its kitchens, dining areas and take-out orders.” The tomatoes and mustard seeds are grown by second- and third-generation farmers with the expertise to produce crops that are ideal for ketchup and mustard, explains the media release, which also notes that all of A&W’s Ketchup is produced and packaged in Ontario.

“At A&W, we’re always looking to partner with Canadian suppliers and farmers who are producing natural ingredients,” says Susan Senecal, president and COO, A&W Food Services of Canada Inc. “The tomato farmers in Leamington and mustard seed farmers in Saskatchewan work hard to produce the best quality ingredients for French’s, and we are proud to add these locally-sourced products to the menu at all of our Canadian restaurants, including our restaurant in Leamington.”

“French’s and A&W are committed to the same values, including great taste, real ingredients and added social responsibility. This is a natural relationship for us,” adds Elliott Penner, president, The French’s Food Company. “We have been working with A&W for more than six months to bring this partnership to life, and are excited for such an iconic Canadian company to become the first national restaurant to serve French’s Ketchup and Mustard.”