Goodwill payment will go to growers who supplied to Leamington, Ont. plant

Toronto, Ont. – H.J Heinz Co. has announced it will pay $1.8 million to 43 tomato growers who supplied product to its Leamington, Ont. processing facility, as compensation for the plant’s scheduled closure this June.

According to a report on cbc.ca, the goodwill payment “would help offset costs incurred by some growers who had already begun to prepare for next year’s tomato crop.”

The report cites John Mumford, general manager of the Ontario Processing Vegetable Growers, as saying that all 43 growers have approved the agreement, noting: “It’s an extremely fair settlement and growers seem pleased with it.”

Ontario growers supplied more than 200,000 tons of tomatoes to the Leamington plant each year. The facility officially closes June 27. 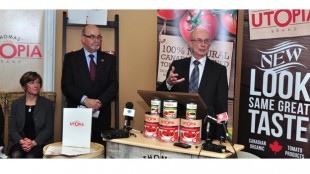