The province of Ontario and the federal government have stepped in with funding for Ontario Pork to help producers prevent the spread of the PED, which has been found in Ontario. In the U.S. the virus has killed one million baby pigs 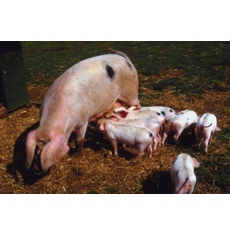 Guelph, Ont. – The pork industry in Ontario has received government support to help prevent the spread of the porcine epidemic diarrhea (PED) virus.

Just this week the virus had spread to a second Canadian farm in Ontario. Reuters.com reports that the farm is located in Chatham-Kent. The first farm, which confirmed the presence of the virus last week, is in Middlesex County.

In the U.S., PED has killed one million piglets. The farm in Middlesex County has lost several hundred pigs. PED is usually fatal for piglets, while older pigs can recover.

Reuters reports that Olymel LP, one of Canada’s largest pork processors, had also detected the virus last week at an unloading dock of its Saint-Esprit slaughter facility near Montreal.

To help contain the spread of PED, the government of Ontario is providing $2 million to help Ontario Pork support industry-wide investments to improve biosecurity measures at critical points across the province, such as assembly yards and truck washing stations. Biosecurity remains the best defense against the virus.

Ontario Pork represents the 1,549 farmers who raise pigs in the province.

The province of Ontario and the federal government have also created a special PED biosecurity program under Growing Forward 2 to help producers, abattoirs, truckers, assembly facilities and rendering service providers in the pork industry invest in additional biosecurity measures to limit the spread of PED.

The Ontario government says the virus had been circulating in Europe and Asia and is now known to be in 23 states. It was first found in Iowa in April 2013, reports NPR.org.

For now the losses from PED have not yet filtered down to the price of pigs. Experts in the U.S. don’t expect consumers will be hit with price increases yet since other factors also affect price. Feed, for example, has been cheaper since the huge corn harvest in 2013, says NPR.org.

But when it hits, PED spreads relentlessly. The virus, explains NPR.org, is similar to how a cold can spread among children even if they are reminded to wash their hands. PED spreads within barns and from farm to farm, in spite of strict biosecurity measures — such as hand-washing for livestock workers. That’s because it can survive in tiny bits of manure that travel on boots or trucks, says NPR.org.