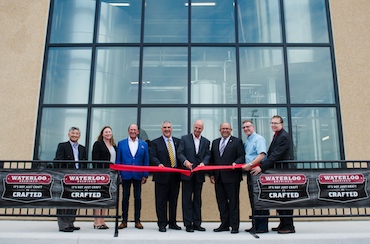 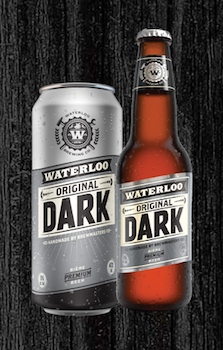 ribbon-cutting ceremony on Aug. 14 for the project that was announced last year.

Attendees included George Croft, president and CEO; Stan Dunford, a board member; Dave Jaworsky, mayor of Waterloo; and Berry Vrbanovic, mayor of Kitchener. All attendees were given a tour of the fully operational facility and had the opportunity to sample products, including Waterloo Smoked Applewood Roggenbier, which will be available in September at LCBO and Beer Store locations as a limited time seasonal small-batch brew.

The new facility, which will be used to brew all of the Waterloo Brewing products as well as seasonal small-batch brews, was designed to include the latest in Bavarian brewing technology and equipment.

The company says the technology is designed to ensure sustainability in the brewing process through improved material use, lower energy consumption and reduced waste and wastewater discharges.

Russell Tabata, Brick Brewing’s COO, says the company wanted to ensure the facility had as little an environmental impact as possible.

“This new state-of-the art brewhouse has allowed us to make great strides in the reduction of the overall carbon footprint of our operation,” he says.