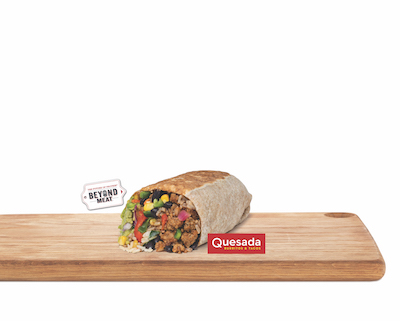 Through the partnership, Quesada becomes the first national chain in the Mexican quick service restaurant category in Canada to partner with Beyond Meat.

Steve Gill, founder and chief recipe officer for Quesada Burritos & Tacos says that more of the company’s customers are identifying as flexitarians and requesting plant-based options.  “Beyond Meat’s Feisty Crumbles perfectly replace animal protein with plant protein that’s juicy and satisfying to anyone – no matter their dietary preferences,” he says.

Quesada’s house-made recipe for the Beyond Meat burrito combines an authentic blend of Mexican flavours with the spicy heat of Habanero pepper, giving that extra flavour kick for which the national Canadian chain has become known. Quesada’s Beyond Meat Burrito can be customized with an array of options that include its homemade Mexican slaw, famous guacamole and made fresh daily Mexican salsas.

Beyond Meat’s 100 per cent plant-based Feisty Crumbles are made from pea protein. The product is the only gluten-free and soy-free crumble on the market, with half the saturated fat of ground beef and no cholesterol or antibiotics.