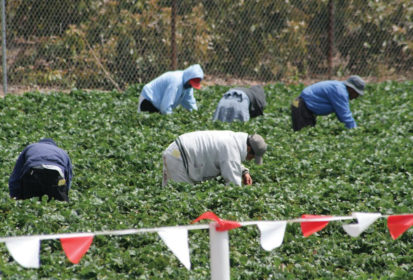 The federal government is announcing $58.6 million in new money to further support temporary foreign workers in Canada’s agricultural sector, it was announced July 31.

Spending is expected to focus on health and safety of temporary foreign workers in Canada.

Farmers will be eligible to access $35 million, administrated through Agriculture and Agri-Food Canada. Details of a new program are still being put together, but the money will be aimed at improving living quarters for temporary foreign workers, the federal government has said.

While the focus will be on improving living quarters, it’s expected that doing so will also help mitigate adverse affects of the COVID-19 virus. To that end, the money can be used for temporary, emergency or off-farm housing, personal protective equipment and the purchase of sanitary stations.

The program will be cost-shared half-and-half between government and producers. While there will likely be a maximum amount each producer is eligible for, that specific amount is still being determined.

It’s believed the program will also be retroactive to a certain date, but currently it is not clear what that date will be. Greenhouses, which employ a large swath of migrant workers, are also eligible to apply for the funding.

Migrant support organizations will be given $6 million as part of a $7.4-million spend to further care for the workers.

To strengthen inspections of employers on farms, the federal government is also spending $16.2 million. That money will be used to hire new inspectors and ensure all allegations against employers are properly addressed.

“We look at the tragedies that have hit the temporary foreign worker communities with deep sorrow,” said Prime Minister Justin Trudeau during a July 31 press conference. “This is something that is on Canadians. We require support from people around the world to grow our food, to harvest our food, to get food on Canadians’ plates.”

“We’ve seen that there are multiple levels that, in some cases, we have let those communities down, whether it’s the farms that haven’t been living up to the standards and expectations that we expect, or provincial governments or federal governments that haven’t been properly involved in ensuring that standards are met and people are protected. There are changes we need to make and we need to continue working to support these people and communities as they support us with good food on our tables,” he said

Producers will be unlikely to hire enough domestic labour to make up for the shortfall of temporary foreign workers (TFWs) arriving to work in Canada this year, according to a recent University of Calgary report.

About 40 per cent of foreign workers currently in Canada are located in Ontario. Quebec is hosting 32 per cent of workers, while British Columbia has 18 per cent.

According to the Ministry of Immigration, Refugees and Citizenship, a little less than 46,000 agriculture workers had arrived in Canada for the 2020 season by July 12, compared to the roughly 51,000 they had projected to arrive before COVID-19 for the first four months of 2020.

Each year, 50,000-60,000 foreign agricultural and food production workers come to work in Canada, with 2019 marking a high-water mark for worker numbers.

According to the federal government, more than 6,000 people are ready to travel to Canada but are unable to.

Throughout the pandemic, there has been a heightened focus on the conditions of TFWs in Canada, in part due to outbreaks and deaths related to COVID-19 among the workers.

During a June 26 meeting of the Standing Committee on Social Affairs, Science and Technology, federal Minister of Health Patty Hajdu was heavily critical of how migrant workers are treated on farms in Canada, particularly during the pandemic.

“The issue of migrant workers and infection, I would say, is far vaster than (personal protection equipment) PPE. I mean, all the PPE in the world will not protect you if you’re sleeping in a bunkhouse that is housing 12 to 15 people that may not have any ability for distancing—certainly no private washrooms or kitchens. There are issues of close-quarter working, depending on the type of farm and produce and producer,” she said, later adding, “I am learning about the way that migrant workers are treated, both documented and undocumented by the way, in this country. If you’re not aware of it, (it) would curl your hair. It is a national disgrace the way that workers are treated. I will say it’s not all farmers, by the way. There are many excellent farmers and farm corporations that are doing a good job, but there are others that are not protecting the health of their workers and are not taking it seriously.”