With the constant shift in Canadians’ desires, how does the industry keep up? 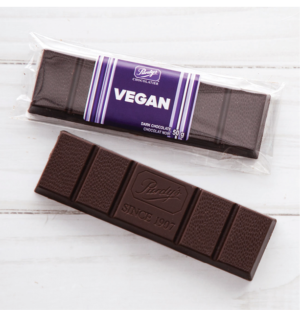 Telling the difference between a food “fad” and “trend” can be tricky business for food manufacturers, particularly for those that create confectionary products. The line between a fad and trend can be blurred because confections aren’t something consumers need to eat to maintain or improve health, but rather foods consumers want to eat.

The food industry has to keep up the desires that consumers have, which can reflect the political culture within society or even trendy diets. Low sugar, plant-based, and non-GMO are just some of the trends that consumers are following. The ability to predict which trends will have staying power and which are just a fad can determine a company’s success or failure over time.

In recent years, many long-lasting trends in consumer preferences have come from restaurants. Take the Beyond Meat plant-based burger for example, which launched in select fast-food chains throughout North America two years ago and was so popular that it’s now available in grocery stores. The Beyond Meat burger’s promise of being a “healthier” alternative to a regular meat burger resonated with consumers, and most importantly, consumers liked the taste and mouthfeel — they felt like they were still eating a traditional burger, while checking off many of the requirements they feel make a food healthy, such as being plant-based, gluten-free and low in fat.

This pattern is also being seen in confectionaries. “There was a certain time where trends came from TV shows when the Food Network was up and coming. That’s gone back to directly from the kitchen,” Mehrad Khan, vice-president of Kehan Food Imports, told Food in Canada.

Retail stores with pre-made meals or grab-and-go products also have confections, which can be a spinoff of the ingredients that are in those products.

Khan uses the example of keylime pie. In a grocery store, there’s keylime pie on the shelf, but right above it is keylime chocolate by the same manufacturer. Manufacturers may make rebuild products with existing products ingredients.

Even with processers being innovative with existing products, consumers still enjoy the flavours of their childhood.

In North America peanuts have been a prominent dietary fixture since the creation of peanut butter in 1884 — despite the fact that peanuts are technically not even a nut.

But peanuts taste nutty, they are cheap and they are a high source of protein, so many of us grew up with peanut butter. Although most adults no longer eat peanut butter and jelly sandwiches, entrepreneurs have capitalized on that sense of nostalgia with adult-friendly products containing similar ingredients.

“We launched a peanut and jelly chocolate two years ago and it was our single biggest launch ever. It is our single best-selling pieces,” said Rachel McKinley, head chocolatier at Purdy’s Chocolatier. “People say ‘it tastes like my childhood.’”

Although nostalgia is an important factor when buying sweets, what is in the product is also important. As millennials gain buying power, they are positioning themselves as a healthier generation. McKinley said that during a period of political and climate instability people look for a form of control. One thing they can control is their diet.

“The threat of climate change scares millennials a lot, and so they control the things that they can control in their life; health is one of them,” said McKinley.

With the rise of the internet, consumers can now access a world filled with information, including what is in their food. Consumers are more aware of the source of their food, nutritional value and the ingredients. One of the ingredients on the decline in Canada is sugar.

Sweetness on the decline

“There is an awful lot of attention to sugar that isn’t science-based,” said Sandra Marsden, president of the Canadian Sugar Institute.

A survey conducted by Neilsen found that 49 per cent of consumers is looking for products that contain less sugar.

“The prevailing view is that consumption [of sugar] is growing. Well it’s not going up in Canada, it’s going down,” said Marsden. However, she noted, obesity levels have not subsided.

Sugar’s role in confections isn’t just for sweetness, it has functional purposes such as preserving foods, helping bread rise and browning. Alternative sweeteners may not always function the same as sugar, since there is no universal sugar replacement and every recipe has different requirements.

“Organic maple syrup is so much better than white refined sugar, but still it’s sugar,” said Joanne Pryeur of Distribution Horizon Nature. “Date paste is a good alternative to sugar, it’s sweet but healthy. It has fibre and so much more than plain sugar. Good taste doesn’t mean very sweet.”

Frozen fruit purees can be vibrant in colour and are versatile in confectionery.

“I’m seeing people trying to infuse fruit into their product as much as possible. If you look at macaroons, now they have two-tier macaroons,” said Khan. “The outer macaroon might be a raspberry, and the inside would be a mango flavour. You might have black currant on the inside with a green pea macaroon on the outside.”

Consumers no longer want one flavour in their confections, according to Khan. He has seen an increase in demand for multiple flavours within one product.

As the demand for sweetness decreases, not all ingredients added into confections have to be sweet. According to McKinley, there has been a demand for less sweet, more savoury flavours in confectionery.

“As soon as you add a savoury note, the perception of the piece is less sweet for the consumer.”

Chocolate began as a savoury treat in Central America, but McKinley thinks that it is not explored enough in contemporary times in North America. There is some exploration into savoury ingredients being paired with chocolate, which include bacon, cheese, salt and sesame.

With consumers desiring control over their diet, another trend that is on the rise in vegan and plant-based diets. As can be seen with the Beyond Meat burger, consumers still crave the animal products they once enjoyed and are willing to accept plant-based alternatives. Many companies, such as Nestle, Ben and Jerry’s, and Purdy’s, are creating vegan alternatives to their traditional confectionery products.

Although consumers may want to reduce or eliminate foods made from meat or animal products, they still demand products that mimic the taste and texture of foods made from them. An example of this is caviar, which was once is considered a delicacy and was popular throughout the 1990s. It faced a period of decline as many caviar fish are on the endangered species list, including sturgeon caviar.

“There was a decline in the interest of caviar, but there was an increase in molecular gastronomy,” said Khan.

Due to concerns around eating endangered species and the high price of caviar, consumers didn’t want to indulge in this luxury. Molecular gastronomy creates the same shape and texture of caviar, without the use of an animal product. Through this, the flavour profiles are endless. Now any flavour imaginable for caviar is possible, whether it be mango, strawberry, or even chocolate.

As plant-based diets rise, Purdy’s hopped on the vegan bandwagon and introduced their first vegan chocolate bar. When creating new products with specific requirements, there can be challenges when it comes to production.

“We recently launched our first vegan product, and we had to go to great lengths to segregate a production line to make sure there was no cross-contamination of dairy into that line,” said McKinley.” It’s quite costly, and it’s also a space challenge. If you‘re an established business, usually real estate is expensive and you’re using all that you can. Finding space and equipment for it usually requires brand new infrastructure.”

McKinley said that a co-packer could be an option, but that comes with challenges as well. With healthy confections there is often overlap with ingredient and product, creating a competitive market.

“I could go to a company like Lärabar and say ‘I want to make something with dates and coconuts,’ but that’s exactly what they’re already doing,” said McKinley.

Not all flavours are just fads but become permanent fixtures in the confectionery industry. Both Khan and McKinley stated that the caramel flavour arrived, and never left.

“It speaks to the savoury side too. When you eat salt with your chocolate it makes it taste less sweet, but it enhances all of the interesting flavours in the chocolate. It’s a perfect pairing,” said McKinley. “It’s not going away, it’s definitely not dead. It’s not even a trend anymore, it’s just a thing.”

Food trends come and go, but there are elements of them that stay behind and become regular characters in our everyday food lives. Certain trends will disappear, while some, like sweet and salty, will stick around. What you make and bake comes down to your personal tastes, and probably what you remember growing up, “like mom used to make.”