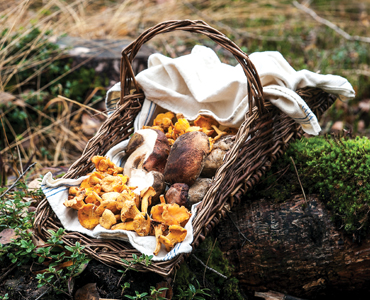 It’s hard to believe, but humankind didn’t always have supermarkets. In fact, we used to go out into the wild and search for our food.

After centuries of eating prepared meals with manufactured ingredients, the practice of foraging is back and gaining momentum. Not in the sense that everyday people are going to seek out forest mushrooms for dinner, more like food and beverage companies committing to using wild ingredients for their unique flavours.

A case in point is Beau’s All Natural Brewing Company. The Vankleek, Ont.-based gourmet beer producer has made foraging for ingredients a common thing in its suds. “The beers that contain foraged ingredients are what we call our Gruit Series,” says Jennifer Beauchesne, director of Communications for Beau’s. “Most beers are barley, hops, water and yeast. With the Gruit Series we dial back the hop characteristics and in place of the hops we use other herbs or botanicals and highlight different combinations of spice.”

Using that formula, Beauchesne says the company was able to get creative with various wild ingredients that were previously unknown to some consumers. “The first time we used foraged ingredients in a beer was in 2008 when we made a beer called Bog Water. It was ground breaking at the time because not a lot of people were using botanicals in their beer. We added in this herb called bog myrtle, which we realized we could get from a local forager.”

Beau’s uses an exclusive forager for its product, who literally goes out and searches for wild ingredients on their property, to be experimented with for unique beer flavours. “[Our forager] collects bog myrtle for us as well as spruce tips. We use that in two or three different beers as well,” says Beauchesne. She explains that the forager they use near the Ontario-Quebec border does most of the foraging for the company, but they do go out occasionally and look for wild ingredients themselves. “We did make a beer with Sumac a couple of years ago. [Sumac] is a tree with many kinds of characteristics.”

Beau’s has also ventured out to other parts of Canada for wild ingredients, including to Fogo Island, Nfld. “We wanted to make a beer that was in partnership with the island itself,” says Beauchesne. “In that case we went out and did the initial foraging ourselves on the island.” Some of the foraged ingredients that were found on Fogo Island include Newfoundland Partridge Berries and myrrh, which is a hardened tree sap from spruce and pine in this case.

But using foraged ingredients is not an automatic win for Beau’s. Using wild ingredients requires a significant amount of trial and error to get a great beer with wild herbs and spices. “It’s a lot of experimentation. The process usually starts with bringing in the ingredients and playing around with them,” explains Beauchesne. “If they’re dry [our brewing team] might make a tea out of them. We can then use that to gauge how strongly the ingredient is going to present in the beer itself.”

Another Ontario-based brewery that has decided to go the way of the wild is Bush Pilot. Vlado Pavicic is the director of Sales and Marketing, and is also known affectionately as the “co-pilot.” The company makes a beer called Pengo Pally using foraged arctic herbs. “We decided to put an arctic element [into the beer]. We experimented and got five different wild, handpicked herbs and for a good month we were brewing tea,” says Pavicic. “We use three handpicked herbs: Labrador, Small Labrador and Crowberry.” The brewery has a variety of products but only one other that contains a wild ingredient, and that’s its Stormy Monday brew, which contains handpicked juniper berries.

Forbes Wild Foods is a major Canadian distributor of foraged ingredients. For 18 years the company has been at the forefront of foraged ingredients, catering to both consumers and businesses. “We work with Native communities, folks that have access to large, pristine land and who have the ability to forage wild foods,” says Dyson Forbes, a spokesperson for the company. “We sell to kitchens and restaurants all across the country.”

Forbes forages for a laundry list of products to sell to a wide variety of consumers. “At the beginning of the year there’s a few different mushrooms like morels and pheasant back mushrooms, and wild leeks.” After those season openers comes fiddlehead mushroom season, then once summer hits the company offers wild Saskatoon berries and wild strawberries, although Forbes says the latter are “extremely finicky and difficult to pick.” Forbes also currently has fridges stuffed with sea asparagus and will soon get their hands on some wild watercress.

“There’s a small handful of our products that are not foraged, but they are still wild products,” adds Forbes. “For example, maple syrup. Nobody went and planted the forest. It’s always been a maple forest, they just came with the tubes and stuck them in the trees.” As well as offering maple syrup Forbes distributes birch syrup and various others.

The company also searches out hard-to-find wild ingredients. “There are a lot of wild foods where the abundance and the availability are different,” says Forbes. “They may be abundant in some areas, but not available or easily accessed by people. So we work with people to try and bring those down and reintroduce them to areas where they may have been lost.”

Forbes says that awareness of foraging ingredients has definitely grown in recent years. “Eighteen years ago when we first started doing this, I would walk around from restaurant to restaurant trying to introduce people to the products and talk about what we had,” recalls Forbes. “Chefs were looking at me like, what kind of scam am I trying to pull? And what on earth is a Red Hairy Skunk Currant? But there were a certain amount of restaurants that knew we were onto something.” Customers also began taking note of these unique ingredients as well, and were inspired to try them again.

The company is now a leader in wild foods and sells to clients of all kinds. And foraged ingredients can now be found in a number of different restaurants, food and beverage products, farmers markets, and retailers. And for the most part they’re not new ingredients. “All the different foods that we have now, they’re not new, they were just forgotten,” he explains. “They may be new to everybody today, but these were the things our grandparents ate because they didn’t have access to everything they have in grocery stores now.”