Part II of our look at logistics in the food and beverage industry looks at methods for boosting efficiency, from technology and scheduling to working with the competition 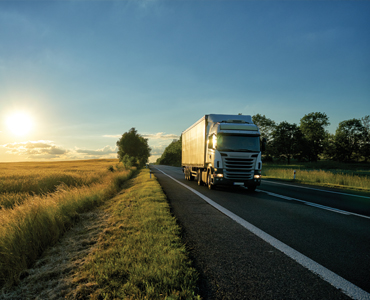 Technology, including temperature control monitoring systems, is becoming more ubiquitous during the transportation of food and beverages.

It’s a trend Doug Barnes, senior manager, Inventory Planning and 3PL Warehouses, at Maple Leaf Foods in Mississauga, Ont., expects to see even more of in logistics operations, due to the ever-increasing need for efficiency. “Whether it’s autonomous trucks, robotics, or mechanized warehouse equipment, it’s really important to have the right skill set of people in-house who can look at these new technologies and best-in-class systems to identify the opportunities, implement them and then optimize those technologies. It’s being able to take advantage of those technologies

and balance their cost versus the cost benefit of implementing them.”

Barnes believes automation will make things safer and more efficient. “I think it removes some of the potential for human error. When you get into robotics and automation, it’s pretty error-free. Many of our logistics providers today that are using automation seem to really drive very accurate inventories, very accurate picking and product controls.”

Maple Leaf is also looking beyond technology in order to find efficiencies in its logistics operations, notes Barnes. For instance, the company has changed the way its carrier partners deliver Maple Leaf products in order to maximize business efficiencies and improve the shelf life of the goods consumers see in the stores. “We do deliveries and pickups where we’re seeing that some of the retailers want to optimize their fleet for backhaul opportunities. When they deliver to their stores they want to pick up from our warehouse locations, which works for us,” says Barnes. “We also do a lot of deliveries into our customers, big and small. So we may have full trailer loads with full containers going to customers, but we also have a lot of mixed loads where we’re basically doing milk runs and dropping off smaller quantities at numerous facilities.

Barnes adds that the company scrutinizes its loads to further focus on efficiency. “We work a lot, as well, internally looking at

pallet configurations and ensuring we’re maximizing the footprint on the pallet, and cube utilization for our loads to make sure we are keeping trailers full, but not to the point where they become unsafe,” he stresses. “We really want to maximize the footprint as well as every space in the warehouse. We don’t want partial pallets in our business. We try to transact in full pallets where possible and full trailer loads where possible.”

Like Maple Leaf, Toronto-based Nestlé Canada has spent a lot of time re-examining exactly how it does everything, from scheduling its deliveries to packing its containers. Greig Jewell, director of Consumer Value Chain Optimization, says the company is undergoing the process of becoming a LEAN operation. “It starts with constant measurement,” he says. “We are moving to a LEAN enterprise model, so there is a focus on operational reviews: it’s having the right measures in place especially when you are seeing a deviation from the acceptable, finding out what the root cause is and correcting it — sometimes it’s a shift in delivery days, sometimes it’s a shift in transit times, sometimes it’s a shift in product mix. Then our operations people get to the root cause and resolve the issue and return us to where we need to be. Sometimes it’s looking at how frequently we go to a customer and what their buying pattern is and aligning their buying pattern with how we ship to them.”

Just because Nestlé Canada relies on warehousing partners to run its distribution centres, it doesn’t mean the company doesn’t pay strict attention to its warehousing operations. “In warehouses, labour is always a cost driver, so we look at the movement of goods, the picking of goods,” says Jewell. “We were able to work with a third-party provider and come up with a layer pick operation which took away most of the case pick at a much reduced cost, as well as reducing damages because you aren’t handling as many cases. It also adds an element of safety because now you don’t have people lifting all the cases, you have machines doing it.”

Not only has the company’s picking operations undergone changes in the name of efficiency, so has its approach to deliveries. Jewell says Nestlé has turned to making more frequent, smaller deliveries and to self-consolidating deliveries with an assortment of product categories, and he doesn’t expect the changes to stop there.

“At some point we are going to be co-operating with our competition to co-load,” says Jewell, “and reduce the amount of trucks on the road and the amount of trucks showing up at our customers’ doors. Years ago you’d never do anything with a competitor, but now if you are shipping something somewhere and they are too and you are both shipping half a truck to the same customer, why isn’t everything on the same truck if it makes sense?” Jewell adds that he doesn’t think there will be a choice in the long term. “I think in some cases companies will be smart enough to work together and say ‘this is how we do it,’ and in some cases I think customers are going to force it.”