Eye of the tiger

Tiger nuts, one of the world’s oldest existing sources of nutrition, are making a big comeback among health-conscious North Americans 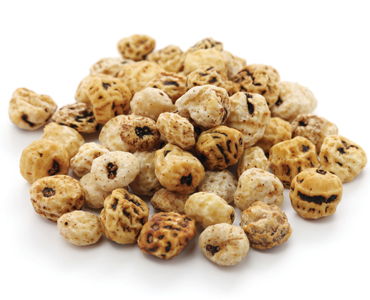 When Jack Sims was a child in the U.K. in the years following the Second World War, post-war rationing measures meant there weren’t a lot of candies available for kids. Luckily, tiger nuts stepped in to fill the void. “The raw tiger nuts are quite sweet in the middle – they taste a bit like coconut,” says Sims, “so they would put them in little packs and we all bought them and ate them like candy.”

But tiger nuts essentially faded from public consciousness in the years since, and very few people in North America

even knew what they were up until a couple of years ago. So when Sims and his current business partner Jim McNulty had sold their previous businesses and were looking for new ventures, they started reminiscing about the tiger nuts they used to eat as kids in England. The pair decided to take the plunge and launch Tiger Nuts USA in 2013. It turned out to be a smart move, as the public was ripe for this nutrition-packed “superfood,” which is currently gaining great popularity among health-conscious eaters.

What are tiger nuts?

Interestingly, tiger nuts aren’t actually nuts at all; they’re tubers that come from a grass-like plant called yellow nutsedge. They’ve been around for thousands of years – in fact, a recent study from Oxford University determined that the primary food consumed by Paleolithic cavemen was most likely tiger nuts.

Most of the tiger nuts on the market today are grown in Spain or Africa. Slightly sweet and nutty flavoured with a hint of a coconut-type taste, they have a distinctive texture, which many describe as a mix of crunchy and chewy.

What are the nutritional benefits?

“It’s probably the healthiest snack food on the market,” says Sims. Gluten-free, organic, and nut free (despite the name), tiger nuts are a great option for those with allergies and dietary restrictions. “They’re also incredibly good for your digestive system, especially the colon,” says Sims. Because they’re high in resistant starch, which helps with weight loss by reducing blood sugar spikes and keeping people feeling fuller longer, experts are touting them as an ideal weight-loss food.

“The fibre is so high, when you eat these and drink a glass of water, it curbs your appetite,” adds Sims. They’re also high in magnesium, zinc and phosphorous, as well as vitamins E and C; they have a low glycemic index; and they’re considered a good source of healthy fats.

How are people eating tiger nuts?

“Primarily we sell it as a snack,” says Sims, noting that people will typically munch on handfuls of straight tiger nuts. “But you can also bake with it, because we have a tiger nut flour.” There are countless recipes being shared on the Internet for baked goods made from tiger nut flour, from pancakes and cookies to zucchini bread.

Canada’s Ecoideas, based in Markham Ont. – which offers a line of tiger nuts that includes whole, skinned, ground and sliced options – also recommends on its website that ground tiger nuts can be added to baby food for a nutritional boost. Other products made with tiger nuts that are available in the Canadian marketplace include the Govinda brand Creamy Vanilla Tigernut Spread and Govinda Chufli Hot Tigernut Cereal.

According to Sims, tiger nuts are becoming popular among all age groups. “It started out as the older people who found us, but it’s getting younger and younger all the time,” he says. “We didn’t realize this when we started, but the younger people want to change the world and we’re trying to do that in our own little way too; trying to inspire people to eat and live better lives.”