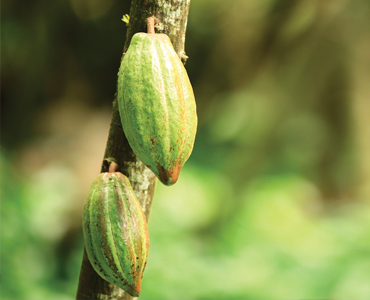 Until a month ago, the co-owners of Ambrosia Pastry Co. in Waterloo, Ont., took a very “old school” approach to producing chocolate: every week they tempered 80 lbs of it by hand on a marble slab.

While the husband and wife team of Tim Simpson and Aura Hertzog have finally purchased their first tempering machine, the traditional approach is one the pair still applies to the entire chocolate making process. As a small producer of bean-to-bar craft chocolate, Ambrosia acquires cocoa beans, including Criollo and Trinitario varieties, from Ghana, Peru, Madagascar, Nicaragua, Belize, Venezuela, Papua New Guinea, Ecuador, Dominican Republic and Mexico. These flavour beans, or origin beans, are then used to produce milk (45-per-cent Nicaraguan or 55-per-cent Ghana) and dark chocolate (up to 75 per cent) bars.

One area where Ambrosia doesn’t follow tradition is in the sourcing of its beans. According to Hertzog, the company

won’t purchase cocoa beans unless they are from a source that has been verified as sustainable. “Our goal eventually is to be able to go and visit the farms we are getting the beans from, but we don’t have the buying power yet to make that feasible, so we’re working with others who are doing that,” she says.

In this case that means purchasing from larger craft chocolate producers – including Habitual Chocolate in Woodstock, Ont. and ChocoSol Traders in Toronto – and wholesale suppliers like as Chocolate Alchemy in Oregon. Hertzog says that Ambrosia is “pretty strict” when it comes to taking on new suppliers and insists on knowing exactly where any beans originate before purchasing them, even if the odds of getting chocolate from non-sustainable sources is low.

“The one advantage to small bean-to-bar making is that most of the chocolate that is available to us is sustainable. It is usually fair trade or organic or is from a farm that maybe doesn’t have the certification but is following those guidelines. But for the most part a lot of it is FTO. That’s because all of the bad cocoa — if you want to call it that — is sold to the big guys. It’s already bought up.”

Understanding exactly what allows cocoa beans to be defined as sustainable tends to be a bit of a tricky task, as every company that deals with chocolate tends to have its own definition of the concept. Even the London, England-based International Cocoa Organization (ICCO), a United Nations-created organization aimed at increasing the sustainability of the entire cocoa value chain, doesn’t have a simple definition of the concept.

When the term “sustainability” is invoked it is usually used in reference to environmental concerns or agricultural procedures, and while ICCO information and media officer Michael Segal says these are factors that must be considered when addressing sustainability in the chocolate industry, it’s people that tend to be top of mind, in particular the small, underpaid farmers and the young victims of “the worst forms of child labour,” in other words, child slavery.

Segal can’t estimate how much of the world’s cocoa bean production could be classified as sustainable, although he tries to put the issue into some perspective. “I can tell you roughly it might be 20 per cent of the cocoa production that is in some way certified. Whether you consider that to be sustainable is a very moot point,” he explains. “The issue is that doesn’t necessarily guarantee a long-term better income for the farmers — the ones who need it most. And there are other issues related to certification that many of the farmers are leery of, such as it would cost them to be involved in it, which is not necessarily incorrect.”

According to Segal, the ICCO has determined that for an average bar of chocolate, “at the most, about five or six per cent of the value of it comes back to the producer whereas the actual cocoa percentage is enormously higher than that. In many cases the producer is not getting a fair share of the value of what the final product is.”

It’s not just the ICCO, which is conducting its biennial chocolate sustainability conference this month in the Dominican Republic, or NGOs working in chocolate-producing countries that are paying attention to the state of the cocoa bean farmer. Chocolate companies such as Switzerland’s Lindt & Sprüngli and Barry Callebaut and Deerfield, Ill.-based Mondelēz International, Inc. that have implemented sustainability strategies typically include community development (such as building schools or creating clean drinking water sources), agricultural best practices education (like teaching farmers to plant other trees, such as banana trees, to provide shade for the cocoa trees, or showing them pruning techniques) and commitments to pay more for sustainable or traceable beans.

“We’ve seen that the average age of cocoa famers has gone up and up,” says Richard Buino, manager of Communications for Mondelēz. “Part of the issue is the next generation of cocoa farmers has not been taking up farming because they haven’t seen a lot of benefit in doing it,” explains Buino. “A lot of young people were going from the farming villages to the cities because they thought, ‘I can have a better quality of life and make more money in the city.’ So part of the overall plan is to make it a viable and attractive profession so that future generations will continue to carry out cocoa farming.”

Along with making farming more attractive, sustainability programs typically have the goal of making it more productive. Measurement and tracking and verification are being applied to every aspect of the process and key performance indicators (KPIs) are being held up as yardsticks by which to measure success, especially in certain geographic locations.

“There are not many more places in the world where you can go and grow cocoa compared to where it is grown now, so it really is the situation where we have to learn how to do better with what we have,” says Seema Kedia, who leads sustainable cocoa business development for Barry Callebaut, and who also serves as marketing manager for food manufacturers for North America.

“When you compare yields of cocoa farmers in West Africa to yields of farmers in other parts of the world, you can see that yields for farmers in Ivory Coast or Ghana have a high degree of room for improvement,” says Kedia. “With the percentage of cocoa that is coming out of those countries compared to the global crop, even a small increase in yield on a general basis can have a really big impact on the entire output of cocoa on an annual basis.” She adds this is especially important as demand for chocolate is increasing, while the cocoa supply has remained relatively flat.

Of course the chocolate supply chain involves more than just cocoa beans, and companies are making an effort to ensure other ingredients are also derived from sustainable sources. Many have turned to using Roundtable on Sustainable Palm Oil (RSPO) certified palm oil (meaning no rain forests have been cut down to plant palm trees.) Nuts are another ingredient that has come under scrutiny — especially hazelnuts from Turkey.

“With hazelnuts, the problem is they have migrant workers, and they have to work under very poor conditions,” says Nathalie Zagoda, head of Corporate Communications for Lindt & Sprüngli. “First of all we tried to source as much as possible from other regions like Italy. We also have a farming program in place [in Turkey]. We start with traceability — we’re there on the ground, we see what is happening, we sensitize people to the issue, and we try to make it happen that the conditions change. We also work together with the farmers.” For 2015, Lindt & Sprüngli set a goal of purchasing 50 per cent of its hazelnuts from sustainable sources. The company surpassed that, achieving a 60-per-cent acquisition figure.

Beyond creating sourcing and farming programs, those who are working to improve the sustainability of the chocolate supply chain also include measures that address everything from reducing water usage and carbon output to improving efficiencies in logistics. For example, last year Lindt & Sprüngli (Canada) Inc. partnered with Bullfrog Power and began running all of its Canadian operations using green natural gas and green electricity. The Swiss parent company is also undertaking a complete sustainability audit of American chocolate company Russel Stover Candies Inc., which it purchased in 2014. In order to reduce its use of fossil fuels, Barry Callebaut burns cocoa shells for fuel in cocoa-producing countries, and what shells it doesn’t burn it sells for garden supplies. Beyond its chocolate sustainability program, Mondelēz’s corporate sustainability policy includes steps like reducing packing and decreasing the amount of garbage that gets sent to landfills.

Still, for Larry Sullivan, president and CEO of Rogers’s Chocolates Ltd., which was founded in in Victoria in 1885 and now operates 10 retail stores in Western Canada, improving the economic conditions of cocoa farmers and eliminating child slavery are the two most important aspects in improving chocolate sustainability. As for his customers, he says they want to see evidence of simple, high-quality ingredients. “By the end of the year there will be no artificial colours or flavours in our product,” says Sullivan. “We’ve resolved the palm oil issue. We’re looking more seriously at fair trade. It’s a balance between what you can accomplish as a small company and what your consumers are looking for. We know they want clean labels, and ours are very clean. We just have a tiny bit of clean up to do. We know they want us to be sourcing in a way that is sustainable — not just in terms of the environment but in terms of the families and the children that are involved in the production. We are certainly moving down those roads.”