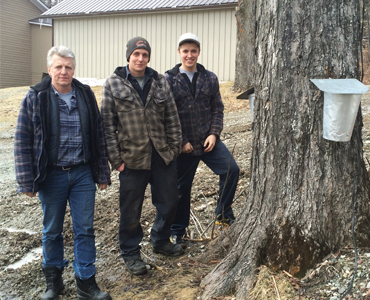 As maple syrup connoisseurs go, you’d be hard pressed to find anyone anywhere who knows more about the sweet science behind the sticky sweet substance than Laval Fortier.

So when he says that the spring of 2016 will be remembered for the exceptional quantity and quality of the maple syrup produced in Quebec, you can bank on it. “It’s very rare that we have so much high-grade syrup, and so early in the season,” says Fortier, speaking last month from his family’s sugar shack in St. Ferdinand, a 90-minute drive east of Montreal in the rural Bois-Franc region. “The colour and taste are exceptional this year.”

As vice-president and general manager of Sucro-Bec, Fortier guides the day-to-day fortunes of a family business that

is well known in maple syrup circles in la belle province. Founded by Fortier’s father Laurier in the family’s hometown of St. Ferdinand in 1986, the company has notably been supplying Costco with organic syrup under its Kirkland Signature label since 1989.

A French play on words that roughly translates into sugared mouth, Sucro-Bec is one of three global suppliers for Costco, the world’s largest buyer of maple syrup. Sales to the international retail discount giant account for approximately two-thirds of the roughly two million pounds of syrup Sucro-Bec produces annually. The rest flows to customers in Europe, Japan and Dubai, to name only a few locations.

A large percentage of that production comes from boiling the sap the Fortier’s extract every March and April from their own stands of maple trees, which are rigged with more than 9,000 taps. But they also buy hundreds of barrels of syrup each year from some 125 other producers, many of them local farmers who use the same wood-fired production process that has been used to make maple syrup in Canada since colonial times.

“The trick is to ensure the right sugar content,” explains Fortier. “But we also have our own mixing recipes that take into account the consistency of the syrup, which is different every year (because it) depends on the weather.” Fortier says that when the sap runs late, which is usually due to winters with extreme cold or an abundance of snow, or both, the quality of maple syrup isn’t the best. “As the season advances, maple syrup becomes darker and more caramelized in flavour.” That was the case the past two years, he adds, which were winters marked respectively by the polar vortex and record snowfall. “Our sap normally runs for during the last week of March, and the first two of April,” notes Fortier. “But the last two years, all three of those weeks have been in April.”

Fortier credits the relatively mild winter in Quebec for the early start to this year’s harvest. “Our sap started flowing on March 10 and is pretty much over now,” he says. “The earlier the sap flows the better. It makes syrup that is generally clearer and lighter in taste, which is what you want.” Fortier also says that the big difference this year is the quantity of quality syrup his company is making. Of the first 500 barrels filled at the company’s production and processing facility in March, 400 were classified at the highest grade of maple syrup.

“That’s very rare,” Fortier says of the 80-per-cent Grade A classification, which is based on the measurement of light transmission through the syrup using a spectrophotometer, as well as on taste, clarity and density. “Last year, only nine per cent of our total production was that high of a grade.” According to the producer, this year’s bumper crop will help to downplay recent fears expressed in the Quebec media that the burgeoning maple-syrup industry in the United States poses a threat to Quebec’s preeminent place as the world’s biggest maple syrup producer.

Those fears followed the release of a government-ordered report by Florent Gagné, a former Quebec deputy minister, which chronicled the rise of competing maple syrup markets. “The maple industry…has become a flagship of Quebec agriculture,” Gagné wrote in his report, which was released in February. “But the greatest danger it could face is refusing to see that real threats are looming on the horizon and have begun taking shape.”

Gagné suggested, however, that Quebec could lose market share not only because of increased competition, but because of the stifling effect of the production and marketing rules and regulations imposed by the union-like Quebec Federation of Maple Syrup Producers.

Gagné says that Quebec’s enforced collective approach to producing and selling maple syrup – restrictions that new competitors don’t face, helping them earn growing market share while Quebec’s market share stagnates – has resulted in “lower revenues per pound for their product than their competitors in other jurisdictions.” Fortier is quick, however, to defend Quebec’s regulated system. “We’ve built a system that is the envy of the world in regards to grading and marketing and prices,” he says. “It’s helped to stabilize production and even build an annual reserve to ensure steady supply to customers.”

Fortier says this year’s bumper crop is one of the best he’s seen since he first started to learn the business as a kid helping his parents (Laurier, a nurse at a regional psychiatric hospital, and his mother, Réjeanne) produce modest amounts of high-quality syrup in a sugar shack they bought in 1972. “We had a lot of fun and we were very passionate about making and learning everything we could about maple syrup,” recalls Fortier.

In the early years, the family sold their entire production to distributors by the barrel. But all that changed when a close family friend named René Marineau landed them a contract with Costco’s first Quebec warehouse under the Price Club banner. “I did it because I love the family and their syrup,” says Marineau, a retired Montreal businessman who was then in the packaging industry. In addition to coming up with an innovative plastic bottle, Marineau helped the company develop industry-setting standards such as traceability back to individual producers.

Though 84-year-old Laurier Fortier remains the company president, and still drops in regularly to help pour and pack syrup at the processing plant, it is Laval and two of his three children, Jason and Derek, who now run the day-to-day operations. “We’re always here to make sure things run smoothly,” says Laval. “That’s part of the reason for our success.”

For his part, Derek, the 23-year-old baby of the family, is happy to be following in the footsteps of his grandfather and father. “I love everything about this business: caring for a maple bush, tapping, boiling, mixing, you name it,” he says. “I was born to do this. Making maple syrup is in my blood.”