Quenching consumers’ thirst for new flavours, cider producers are putting the fermented fruit drink back on the map 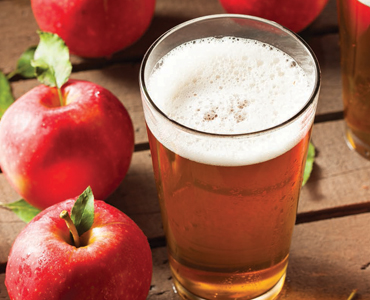 Cider may be today’s trendy tipple, but its rise in Canada is actually a comeback story. The fermented fruit drink was the first alcoholic beverage made in North America. Settlers planted apple orchards with seeds from England and fermented the apple juice. “Grain went to feed cattle and horses, so there was no excess grain for malting and brewing,” explains Thomas Wilson, co-founder of Spirit Tree Cider. “Cider was it.” However, by the late 1800s, cider fell out of favour because of the Industrial Revolution (when people migrated to cities) and the increased consumption of beer.

As someone who grew up on an apple orchard and eventually took over the family farm in Caledon, Ont., Thomas Wilson often played around with making hard cider. About a decade ago, he looked at the hard numbers. He and his wife Nicole thought producing cider would be more value-added than typical farming and would allow the business to operate year round.

“A couple of times, people thought cider was going to take off and it didn’t,” says Wilson. “The numbers started to move in

Cider may be today’s trendy tipple, but its rise in Canada is actually a comeback story. The fermented fruit drink was the first alcoholic beverage made in North America. Settlers planted apple orchards with seeds from England and fermented the apple juice. “Grain went to feed cattle and horses, so there was no excess grain for malting and brewing,” explains Thomas Wilson, co-founder of Spirit Tree Cider. “Cider was it.” However, by the late 1800s, cider fell out of favour because of the Industrial Revolution (when people migrated to cities) and the increased consumption of beer.

The couple bought a new farm in the Caledon hills and built an apple orchard and cidery from scratch. Spirit Tree Estate Cider opened in 2009, starting off with a traditional English draft cider and an estate reserve, a wine-style cider that’s aged in oak barrels. Spirit Tree has since added a number of other varieties, including pear cider (also known as perry), dry-hopped cider and seasonal ciders such as pumpkin.

“Our goal was to create something like a winery for cider,” says Wilson, who is also chairman of the Ontario Craft Cider Association. “We have the orchard surrounding us and the facility where people can try different ciders and learn about cider. We realized there was going to be a lot of consumer education and awareness to not only build a brand for ourselves, but also an industry here in Ontario.”

Over the past few years, the cider scene has exploded, with players big and small entering the fast-growing market. Across the country, business is booming. In British Columbia, cider sales totalled $74.5 million in 2015, according to the B.C. Liquor Distribution Branch. In Ontario, sales of cider have more than quadrupled within the last three years, reaching $17.6 million in fiscal 2015/16, according to the LCBO. Craft ciders, which represent almost a third of those sales, grew 54 per cent over last year, with sales totalling $5.1 million.

Overall sales of cider/perry in Canada reached $356 million in 2015, according to Euromonitor International. Constellation Brands Inc., which owns Growers, and Molson Canada, which entered the cider market in 2013, dominate the category. In 2015, their respective volume shares were 33 per cent and 17 per cent, albeit down from 44 per cent and 20 per cent in 2012.

“Over the last few years, the growth of the cider market has been straight through the roof,” says Jeff Dafoe, president of Toronto-based Premier Brands, which represents Rekorderlig cider from Sweden and William’s Sir Perry pear cider. “As with anything, it’s settling a bit, but it’s still double digits.”

Part of the reason for cider’s growth is the beverage’s recognizable attributes, says Dafoe. “Everybody knows about apples and pears, so there’s an authenticity to it,” he says. “And when you’re talking about fruit, [cider] starts to take on a bit of health connotation. It’s a little different knowing where the apples were picked versus someone mixing up a cooler in a lab. There’s a lot more authenticity and naturalness to cider.”

Thornbury’s flagship product is a premium cider made to taste like a traditional English cider – dry and crisp – and is made with 100-per-cent fresh-pressed local Ontario apples. Clark believes that while flavours will come and go in the cider category, “the real dry-style artisanal cider is here to stay. Consumers are showing an affinity for it, and they’re into all kinds of different innovation, but I think the core of that business will be the drier style.”

That said, the company is planning to branch out with flavoured cider. “In keeping with artisanal flavoured products, we’ll be looking at a cran-apple and a spiced apple down the road,” says Clark. He also sees potential for an ice cider – similar to ice wine, but made with apples.

One big opportunity for craft cider is millennials who appreciate premium products. “We really looked at the marketplace and found that millennials are willing to pay a bit more for a premium product,” says Mike Daley, cidery manager for BC Tree Fruits, a fruit growers’ co-operative that launched Broken Ladder cider in 2015. “They do their research, they have smartphones and they can find out how authentic the product is.”

Daley says the brand’s biggest challenge is educating consumers about the differences between Broken Ladder and other cider brands that have added sugar and flavourings. “I’m not throwing any darts at anybody, but when you look at Molson Canadian Cider, they say ‘made with 100-per-cent Canadian apples,’” notes Daley. “What they’re saying is, of the apples they use in their product, they use 100-per-cent Canadian apples, but they don’t make it with 100-per-cent apples.”

Spirit Tree’s Wilson says there’s a labelling issue in the cider category – some products label themselves as a “cider beverage,” but they’re not technically cider. For example, “Somersby is a blended beverage, like Mike’s Hard Lemonade. They’re buying fermented apple wine and blending it with water and malic acid, and they carbonate it. And we’re on the shelf beside them,” says Wilson.

While Ontario craft cider brands battle the big guys on LCBO shelves, producers had a major coup earlier this year, when the province announced that grocery stores currently selling beer can also sell cider. While the minimum shelf space requirement for Ontario craft cider is 20 per cent, Loblaw Companies boldly committed to 50 per cent. “It’s huge and that’s where the grocery stores are really going to outdo the LCBO because they’re true retailers,” says Wilson. “They get this.”

Ontario Craft Cider Association is also pushing for a change in regulations that it says put craft cider producers at a disadvantage. Cider producers are licensed as wineries, so they can’t get the 30-per-cent reduction in markups available to craft beer producers. However, since cider isn’t made from grapes, producers can’t take advantage of the wine industry’s VQA program, which also allows producers to get a break on markups.

The association’s message to government is that there’s a huge opportunity to grow the cider industry and benefit the economy, but that it needs some support. “Cider is taking off and there’s still lots of room to grow,” says Wilson. “We have an abundance of apples here and people are really enjoying the product, so it’s a matter of incubating our local industry – and that goes across Canada.”