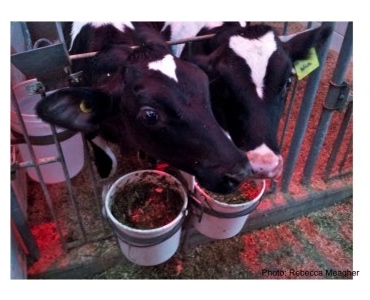 Agassiz, B.C. – A recent study from the University of British Columbia (UBC) Dairy Education and Research Centre has found that dairy cows have surprising intelligence and emotional sensitivity.

The study, reports Wired.com, looked at how separating calves from their mothers affects their emotional health and how the process of dehorning affects their physical health.

In dairy farming, calves are often separated from their mothers right after birth. The thinking behind this has always had to do with the calves’ safety.

But now, say the UBC researchers, separating the calf from its mother appears to be distressing. So much so that it’s been found the animals experience negative emotional states, leading to a decline in their willingness to eat solid food, says Wired.com.

The researchers also found the same negative emotional states after the hot-iron dehorning they go through.

Nearly all farms that keep Holstein cattle dehorn them at a young age to protect workers and other cattle.

The calves are given a sedative and a local anesthetic injection before the procedure but as these wear off they experience pain.

One way to assess emotions in both people and animals is to look at the cognitive component using judgment tasks.

For instance, depressed or anxious people tend to interpret ambiguous stimuli more negatively than do happier and calmer people. Animals can be trained to perform these same judgment tasks, and the same negative judgment biases (i.e., interpreting ambiguous stimuli as more negative) have been reported for animals experiencing negative emotional states, such as chronic stress and exposure to unpredictable environmental changes.

In studies, the researchers have found that calves can show this negative judgment bias for at least two and a half days, says Wired.com.

“We can’t say that separation is just some instantaneous event that may be painful but doesn’t bother the animal,” says Daniel Weary, an applied animal biologist at UBC.

“It does bother the animal. It bothers them enough that their mood state changes for at least a couple days.”

Photo from The Faculty of Land and Food Systems, UBC.