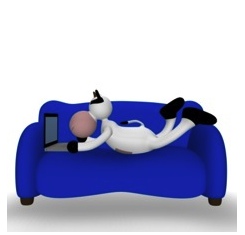 If you haven’t ventured onto social media site Twitter yet, then 12 dairy cows in Brant, Ont. are way ahead of you. For one year, with the help of the Critical Media Lab, which is part of the University of Waterloo’s English Department, these 12 dairy cows will be engaged in a live and ongoing Twitter feed.

The primary goal of the project is to raise questions about how technology mediates the relationship between animals and humans.

Vandenberg’s dairy is operated by a voluntary milking system (VMS). Each cow wears an RFID tag that is used to coordinate her activities with a central computer.

As a cow approaches the farm’s robotic milking pen, the computer reads the tag and determines whether or not the cow is scheduled to be milked, based on her stage of lactation and average daily output.

If the cow is ready for milking, she is allowed into the pen. Once inside, a robotic arm washes her teats, latches on, and extracts the milk while the cow eats high-grade feed to make her happy.

The milk output and feed input is recorded by the main computer and stored in a database, along with the total milking time, time/teat, and total time in pen.

The farmer enters additional information into the database, such as a when a cow gives birth, becomes ill, or is sent for slaughter.

The Teat Tweet Dairy Diary site explains that in discussions with Vandenberg and other farmers using the VMS, O’Gorman and Broglio discovered that this technical process has radically altered the daily rhythms of the dairy, as well as the farmer’s relationship to the animals.

The cows are now able to literally milk themselves at all times, day and night, and the farmer has become primarily an information manager.

As an intervention into this process, O’Gorman and Broglio sought to develop a mobile application in the Critical Media Lab that would allow the farmer to regain intimacy with his cows, and allow anyone at all to learn more about where their milk comes from.

So Vandenberg selected his12 favourite cows, varying in age and stage of lactation. The team photographed the cows during interviews with the farmer, and prepared a profile for each one, which was used to develop Twitter profiles.

They then created a “voice” for each cow and created a variety of tweet variables that would be used to flesh out data pulled from the VMS database.

The result is a live and ongoing twitter feed for each of the 12 cows, which relay their milking activities in conversational terms, and sometimes quote lines of poetry from Virgil.