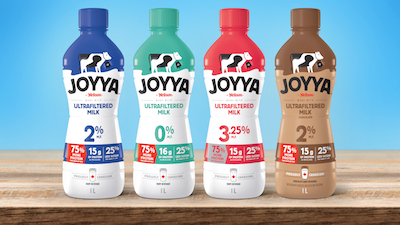 Saputo has launched JOYYA ultrafiltered milk, an all-Canadian dairy product that contains up to 16g of protein per 250ml serving. It’s produced in Canada, by Canadians for Canadians, and offers 75 per cent more protein and 25 per cent less lactose (sugar) than regular milk.

As regular milk has been challenged recently by trendy plant-based alternatives, Saputo commissioned a nation-wide survey with Maru/Blue* to understand Canadians’ milk consumption habits and preferences.

Despite the rise of milk-alternative trends and a very cluttered dairy aisle, the survey revealed that  87 per cent of Canadians still drink or cook with milk regularly and 40 per cent consume it daily.

JOYYA ultrafiltered milk is available in a one litre format in the following varieties:

*Survey Methodology: From October 17th to October 18th 2018 an online survey of 1,525 randomly selected Canadian adults (1,326 of whom consume regular milk) who are Maru Voice Canada panelists was executed by Maru/Blue. For comparison purposes, a probability sample of this size has an estimated margin of error (which measures sampling variability) of +/- 2.5%, 19 times out of 20. The results have been weighted by education, age, gender and region (and in Quebec, language) to match the population, according to Census data.