Bacon and a dream

Josh Sankey is heading for Los Angeles from New York in a trailer. But he has no money or credit cards. He's paying for everything using 3,000 lbs of bacon. 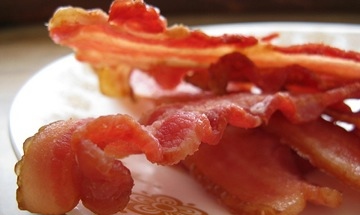 Josh Sankey is on an adventure. He’s heading for Los Angeles from New York in a trailer. He isn’t carrying cash with him, nor does he have credit cards. He’s using 3,000 lbs of bacon to pay for anything and everything he needs as he hits 12 cities in a two-week trip.

Sankey is an actor but the stunt is real. You can follow it here: http://www.baconbarter.com/, on Twitter and Facebook. He’s not doing it on his own of course. Oscar Mayer, a division of Kraft Foods, is behind it all, using the stunt to launch its new Butcher Thick Cut bacon. The promotion is being called the Great American Bacon Barter.

The whole gimmick made me curious enough to want to read more about it and check out the site. But I’m really curious to know how this stunt will affect consumers. Is the route planned around cities where there’s already a high consumption of bacon? Will it lure new consumers to the product? Who else is going to love this gimmick enough to follow Sankey every step of the way?

So I guess I’m wondering where the Oscar Mayer stunt fits in. The company says it wanted to reach consumers in new ways and the stunt is different enough, for sure.

Melissa Preddy of businessjournalism.org thinks it’ll work. Preddy says the gimmick is goofy enough to connect to consumers IF they’re in a playful mood. Bartering is exploding in the U.S. And bacon is, well, bacon. So what’s not to like?

Sankey’s journey ends on Sept. 23. But we may never know how well (if at all) the stunt sizzled.

UPDATE:
The stunt did sizzle. But bacon in general can out-buzz even Angelina Jolie online in the U.S., says the Word of Mouth Marketing Association (WOMMA).

WOMMA adds that thousands of people responded to the stunt, bartering with Sankey and giving him much more than he needed.

In fact, Sankey bartered bacon for NASCAR tickets and backstage passes to music festivals. And Cedar City in Utah changed its name for a day to Sizzle City.

As for Oscar Mayer, the campaign doubled conversations about its bacon, making it the most talked about bacon brand in the U.S. It even generated more buzz than the brands’ four biggest competitors combined, says WOMMA. At one point during the campaign, fans were tweeting “Bacon Barter” every 60 seconds. And thousands of TV, radio, print, and online stories turned the campaign into a cultural phenomenon, says WOMMA.