Pandemic affected availability of food in 2020 due to shutdowns: Stats Canada 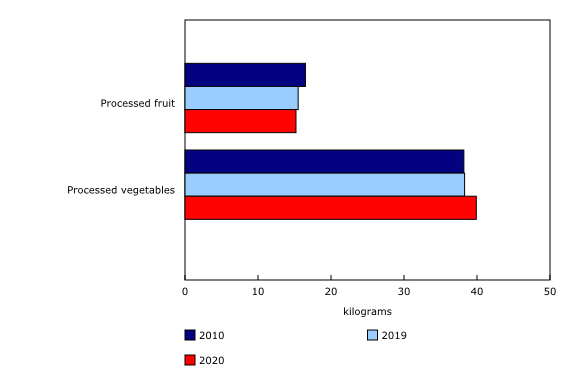 According to Stats Canada, the pandemic impacted some aspects of the food supply chain from farm to fork, leading to the temporary shutdown of slaughterhouses and food processing plants, labour shortages, trade restrictions and a shift in consumer demand away from restaurant fare to home cooking.

According to the latest data, the total amount of processed fruit available for consumption decreased 1.9 per cent  from 2019 to 15.2 kg of fresh equivalent fruit per person in 2020, and was down 8.3 per cent from 2010. The availability of total frozen fruits (-9.1 per cent) and canned fruits (-8.9 per cent) both declined from 2019.

Poultry production decreased 2.2 per cent in 2020—the first decline in the total weight of poultry birds produced in Canada in a decade. 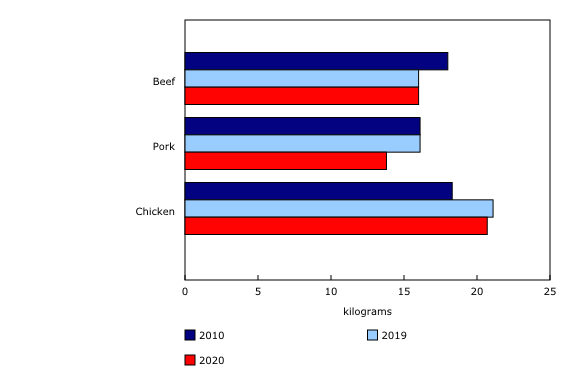 Total egg production rose 2.3 per cent annually to 841.1 million dozens in 2020. Pandemic-related restrictions on imports (-20.3 per cent) and disruptions at processing facilities (-two per cent) reduced the amount of eggs available.

In contrast, the availability of total cheese increased 16.8 per cent from 2010 to 14.3 kilograms in 2020. Production and imports of cheddar cheese and variety cheeses were both up from a decade earlier, while the availability of processed cheese was down 1.7 per cent.

The availability of all cream, including table cream, sour cream, whipping cream and cereal cream, was up 18.5 per cent from 2010 to 9.8 litres. 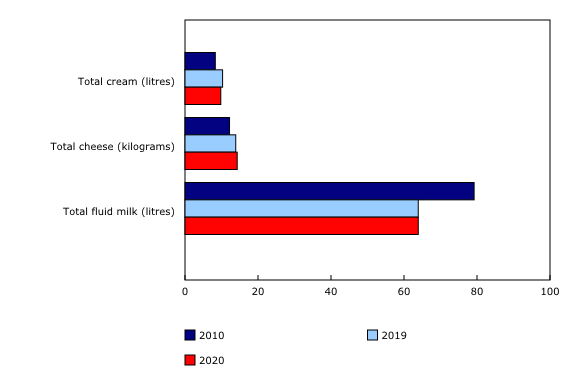 Wheat flour available for consumption increased for the third consecutive year, edging up 0.4 per cent to 60.4 kilograms per person in 2020. However, this was down 3.4 per cent from 2010 levels.

Conversely, the availability of rolled oats decreased by over half (-62.2 per cent) from 2019, as a result of high exports (+22.5 per cent). Despite the annual decline, rolled oats availability was up 77.1 per cent from a decade earlier.

Breakfast food availability, which includes hot and cold cereals, was up 5.9 per cent from 2019, but was down 12.5 per cent from a decade earlier.

Maple sugar available for consumption more than doubled from the previous year to 0.9 kilograms in 2020, because of a record high production (+8.3 per cent).

Refined sugar availability rose 1.4 per cent from 2019 to 30.5 kilograms, as a result of higher production (+4.7 per cent) and imports (+5.1 per cent). This increase may have been related to panic buying at the onset of the pandemic.

Availability of juices and soft drinks continues decade-long decline
The availability of most juices has been decreasing for over a decade. The lower demand for juice may be due to health-conscious consumers shifting away from sugary drinks. The availability of all juices was down 2.7 per cent from 2019 and down 21.6% from 2010.