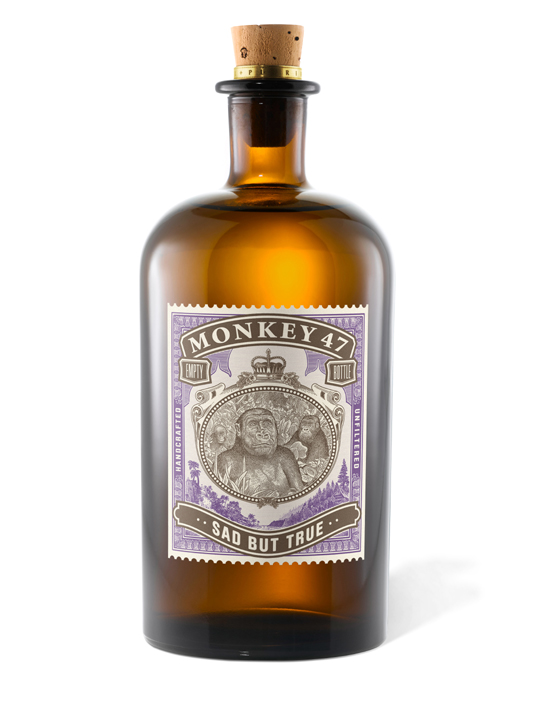 June 2, 2020, Toronto, Ont. – Monkey 47 Schwarzwald Dry Gin is celebrating 10 years in business with the release of six anniversary-edition empty bottles to raise money for the world’s most endangered primates.

The campaign takes its name from an accurate description of the situation facing 283 endangered primate species — sad, but true.

To mark the first 10 years of Monkey 47, the brand gave an initial donation to the World Wide Fund for Nature (WWF), which will be putting the money to good use in its primate protection projects around the world.

The company states that human activity – primarily deforestation and poaching – is a significant part of the precarious situation that has put so many primate species at risk.

“Loved by bartenders and those in the know worldwide, Monkey 47 has gained cult status over the past decade,” says Aoife O’Reilly, Monkey 47 brand manager in Canada for Corby Spirit and Wine. “We admit it’s an unconventional concept. It’s sad to sell an empty bottle, but the premise behind it is anything but.”

Six special edition bottles will be available, each adorned with an endangered primate in place of the distinctive monkey that usually graces the Monkey 47 label.

“In addition to the initial donation, for a short time, our Monkey will be offering his rightful place on our bottle to six of his threatened fellow primates, with all of the proceeds from these special edition bottles going directly to the WWF,” adds O’Reilly.

“As much as we understand how treasured its usual contents are, we do plan to leave these six different editions unfilled. Our heartfelt thanks go out to all those willing to buy an empty bottle – it takes a brave soul to forgo your favourite gin.”

The special edition bottles will feature:

The bottles are available at monkeykiosk.com for roughly $38 Canadian and can be shipped worldwide.

Monkey 47 Schwarzwald Dry Gin is a batch-distilled and handcrafted German gin that fuses British tradition, the exoticism of India and the purity and originality of its homeland Black Forest. A third of the 47 hand-picked plant ingredients in Monkey 47 originate in the Black Forest.

A limited quantity of Monkey 47 was introduced in Ontario in December. It is available at the LCBO Gin Shop and select bars and restaurants. It is available in Quebec at SAQ and in British Columbia at the BCLS.