With the help of the federal government and funding, the Ontario Ginseng Grower's Association will expand to new markets in Asia, India and Japan 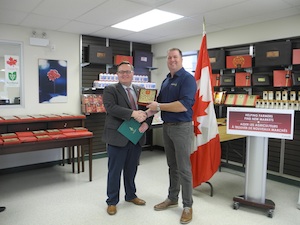 Agriculture and Agri-Food Canada (AAFC) announced in a statement that it has made an investment of $420,000 to the Ontario Ginseng Growers’ Association (OGGA).

The investment will help OGGA “promote and increase the visibility and demand for Canadian ginseng in current and emerging markets, like those in Asia.”

AAFC says ginseng is one of Canada’s largest field grown horticultural exports with export sales of more than 2.63 million kilograms annually at a value of more than $239 million (in 2016).

And demand for Canadian ginseng is growing, throughout Asia, India and Japan.

With the investment from AAFC, the association of ginseng growers will “develop a social media and marketing campaign that includes increasing awareness of the innovative uses for Canadian ginseng in products such as soups, teas and cosmetics.”

The funding will also help growers promote their ginseng at trade shows in Asia.

Pictured in the photo: Bryan May, member of Parliament, and Remi Van De Slyke, chair of OGGA