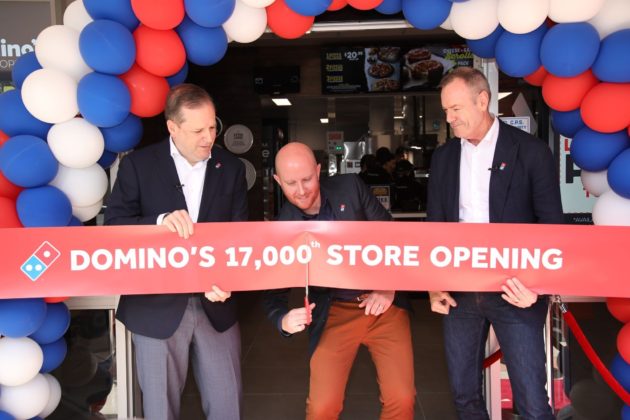 March 3, 2020, Ann Arbour, Mich. – Thirty seven years ago, Domino’s Pizza opened the doors to its first international store at a location in western Canada. This week, the largest pizza company in the world commemorated the opening of its 17,000th store in the world, located in Bradbury, New South Wales, Australia.

“Domino’s opened its first international store in Winnipeg, Manitoba, Canada in 1983,” Ritch Allison, Domino’s chief executive officer, said in a press release. “We’ve come a long way since then, and I’m incredibly proud to announce the opening of our 17,000th store in the world.

“This achievement is a true testament to how hard Domino’s has worked and truly is a reflection of the success of our global brand.”

Domino’s Bradbury celebrated by giving away free pizza and a total of $17,000. The store served up free pizzas to carry-out customers for an hour, with 17 of the pizza boxes featuring a hidden “Golden Slice” worth $1,000 in cash.

“It’s an honour to celebrate this global milestone right here in Bradbury,” said Meij. “This store opening represents our commitment to international growth and development. We look forward to continuing our global growth momentum by opening even more stores closer to our customers and serving up high-quality food to local residents.”