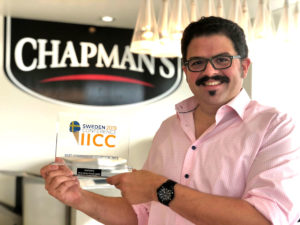 Chapman’s inspiring Yukon Caribou Ice Cream Bar campaign grabbed the attentional of the IICC this year receiving the Best Commercial Solution Award. It is focused on supporting Caribou protection programs across Canada and creating awareness about the ongoing deterioration of Canada’s wildlife. A portion of the proceeds raised from the sale of Chapman’s Caribou Bars will be donated to the Canadian Parks and Wilderness Society (CPAWS).

Chapman’s also took second place in the Best Technical Business Solution category for its internally developed application to curtail energy consumption during times of peak demand. This program is one of many efforts undertaken by Chapman’s to enhance their environmental sustainability.

The IICC is an international association of independent Ice Cream Manufacturers, founded in 1986. Chapman’s has been a member of the IICC since 2013.