Canada’s economy is “firing on all cylinders,” says RBC 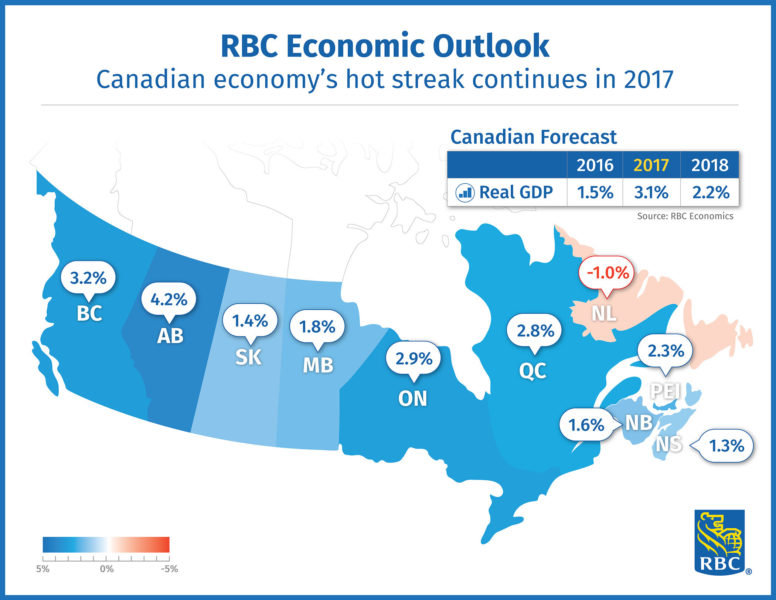 Toronto – Canada’s economy should see “above-potential growth” through to the end of the year, says the latest RBC Economic Outlook.

In a statement, RBC says “consumer spending, business investment and government spending are all” behind the economy’s fast-paced growth. In fact, consumer spending could “remain the key driver of growth in 2017.” 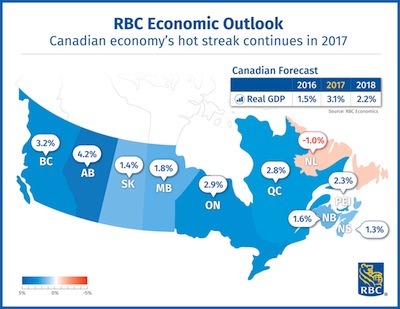 However, consumer spending will slow in 2018, says RBC, but “business investment continues its significant turnaround. Investment spending is expected to add growth every quarter this year and will likely remain an important driver of the economy in 2018.”

The RBC Economic Outlook says the weaker U.S. dollar helped. The Canadian dollar rose about 11 per cent since May. RBC says, “the Bank of Canada’s rate hike solidified the dollar’s gains even in the face of declining oil prices. With additional rate hikes anticipated…the Canadian dollar will average close to 80 U.S. cents over the forecast horizon.”

For more on the RBC Economic and Financial Market Outlook, click here.

Here are summaries for each province, but for the full report, click here.

• 2017 “is another solid year for BC’s economy. Most economic sectors continue to be in full expansion mode at this stage with the labour market impressing with strong job gains being sustained. We expect overall growth in the province to surpass the 3% mark for the fourth consecutive year in 2017.”

• “We now project the rebound in Alberta’s economy this year to be much stronger than we previously forecasted. We boosted 2017 growth from 2.9% to 4.2% to reflect greater-than-expected strength in the energy sector.”

• “A modest recovery is taking hold this year in Saskatchewan in large part driven by a sharp improvement in export activity. The labour market shows signs of stabilizing after employment fell in 2016, although a rise in the unemployment rate in recent months is a disappointment. A negative development has been indications of a significant drop in the agricultural production in the wake of dry growing conditions in many parts of the province. This was a key factor prompting us to revise our 2017 growth forecast for Saskatchewan downwardly to 1.4% from 1.8% previously. We expect this factor to reverse next year under more normal growing conditions.”

• “We lowered our growth outlook for Manitoba marginally this year to reflect reduced prospects for the grain and oilseed harvest this year due to drier than usual growing conditions. Elsewhere in the economy, manufacturing activity is rebounding as expected thanks to a strengthening in both the US economy and Canada’s energy sector.”

• A solid, broad-based expansion remains on track in Ontario. We expect a slight acceleration in the pace to 2.9% this year, which would constitute the strongest rate since 2010 in the province. ”

• “The vigour of Quebec’s economy has been a welcome surprise this year in Canada. Activity blasted out of the gate at a rate of 4.3% (annualized) in the first quarter.  With the provincial jobless rate reaching decades-low and households—and, increasingly, businesses—in high spirit, we expect the good times to persist through the remainder of this year. We boosted our 2017 growth forecast for the province materially from 1.9% previously to 2.8%. This would constitute the strongest growth rate in 15 years in Quebec.”

• “New Brunswick’s economy is getting a jolt of stronger growth this year. From 1.4% in 2016, we forecast the economy to accelerate to 1.6% this year before slowing to 0.9% next year.”

•Nova Scotia’s economy gathered momentum since our June Provincial Outlook, and we now forecast the economy to grow by 1.3% in 2017 and 1.1% in 2018.Employment is on track to increase at its fastest pace since 2012 which will cause a large drop in the unemployment rate as the labour force declines for demographic reasons. Yet the impact of job gains on retail sales and wider economic activity will be muted by a rising share of part-time workers and stillsluggish growth in employee compensation.”

•For the second year running, Prince Edward Island will be the star performer in Atlantic Canada in 2017 with the economy growing by an expected 2.3%.Unlike the rest of the Atlantic Provinces, the number of working-age Islanders is growing after many years of decline.”

•Newfoundland and Labrador’s economic contraction continues to grind onward as the province deals with the end of a long boom in investment activity and the fiscal implications of low oil prices.Beyond headline growth, however, most indicators are in the red. Employment is down nearly 4% so far this year and the decline appears to be accelerating as major capital investment projects wrap up and government departments remain squeezed. The provincial unemployment rate has increased steadily and now sits at nearly 16%—a seven-year high.”