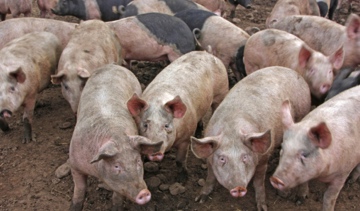 Toronto, Ont. – Another week, another rattling of the economic sabres between Russia and the West, this time with Moscow barring imports of meat and fish, milk and milk products, and fruit and vegetables from Canada and its compatriots that were bold enough to stand up to President Vladimir Putin.

Russia’s retaliatory one-year ban on food from Canada may not seem like enough to handcuff the national industry—Canada is the world’s fifth-largest exporter of agriculture and agri-foods—but it could cause some serious residual damage moving forward.

The country’s food exports to Russia, according to Agriculture and Agri-Food Canada data, were worth $563 million in 2012.

While the national industry had export sales in excess of $43.6 billion that year, the loss of Russia as a customer is no small potatoes for any country recovering from a recent economic downturn.

Ottawa, for its part, has decided to stand tall in the face of the ban, with federal Industry Minister James Moore promising the government “will not be intimidated” by Putin’s power play.

Moore and his cabinet mates may not be scared of the economic fallout that could be looming in the wake of the ban on Canadian food exports to Russia, but it’s hard to take it all in stride.

While economists and politicians focus on the direct impact the latest Russian sanctions could have on the Canadian economy, the residual economic impact could be bigger than just sales to one of Canada’s largest customers.

As if staring down the barrel of steep discounts—or worse—just to get Canadian agricultural products to market wasn’t bad enough, the Russian ban could cost the country jobs in the medium-term.

In an ominous press release issued in the days after Russian Prime Minister Dmitry Medvedev announced the sanctions, Canadian pork producer Olymel l.p. said it is “unable to assess the consequences” the ban may have on its operations.

Russia has been Olymel’s second-largest customer so far in 2014, with pork products for that market manufactured at plants in Red Deer, Alta., and Vallee-Jonction, Que., which employ a combined 2,650 workers.

What’s more, according to company spokesperson Richard Vigneault, Olymel currently has millions of pounds of pork products currently in transit heading to Russia, and it is not known what fate that shipment will meet when it hits Russian shores.

While Olymel said it will make “every effort” to find alternate markets for its products that were destined for Russia in a bid to mitigate the impact of the ban, it’s hard to imagine a scenario where it will be able to maintain production at current levels.

Farms and fisheries across the country that count on the Russian market to unload their stock are surely facing the same unknowns as Olymel, not to mention the manufacturers that process and package food for export.

Moore has been valiant in his efforts to keep morale high, even going so far as to point to the Comprehensive Economic and Trade Agreement (CETA) with Europe as the gateway to opportunities that will “more than offset” any losses from Moscow’s ban.

That is some bold and long-term thinking from the industry minister, who perhaps needs reminding that the food ban takes effect immediately and is good for at least a year, while the trade deal between Canada and the European Union (EU) hasn’t yet been ratified, let alone given an implementation date.

By most accounts, CETA is still two years away from launch.

Taking it a step further, as Derek Lothian of the Saskatchewan Manufacturing Council did in an interview with The Canadian Press, the “ripple effect on related industries” could even extend to sectors like agricultural equipment manufacturing.

The decision by Canada, as well as the United States, the EU, Australia and Norway, to stand up to Putin, as Vladimir Isachenkov of The Associated Press writes, could “cost Western farmers billions of dollars.”

Just how harsh that punishment will be remains to be seen.