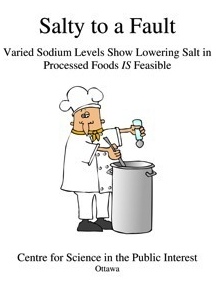 In fact, the report Salty to a Fault also found that sodium levels in otherwise similar foods vary considerably and that many food processors are able to make food with much less sodium than their competitors.

The Centre for Science in the Public Interest (CSPI) – Ottawa, a non-profit health advocacy organization with offices in Washington, released the report. In it the Centre came to the conclusion that the two-fold or greater variations in sodium levels it found within food categories contradict the industry’s contention that high amounts of sodium are indispensable for manufacturing food.

The report also found that many foods contain more sodium than is recommended for a whole day. Especially when you consider Canada’s Food Guide and its recommendation that adults consume an average of 20 servings of foods daily. But most packaged foods exceed the average 75 mg of salt one might expect in a serving in a sodium-compliant diet.

The CSPI recommended that Health Canada “mount a vigorous program including pressuring industry to voluntarily use less salt, setting limits on the sodium content of major food sources, and educating consumers.” Consumers, it says, have an invaluable source of information from the nutrition facts tables. But on those labels, sodium numbers vie for attention amidst the amounts of 12 other nutrients plus calories.

To food processors, the report suggests that most companies could lower sodium levels in most of their products through the judicious use of herbs, flavourful oils, salt substitutes such as potassium chloride, adding more vegetables or other ingredients, using better-tasting ingredients, and simply using less salt – as many companies have already shown is possible.

In Canada, experts estimate that excess sodium intake causes the premature death of some 15,000 Canadians annually and contributes at least $2 billion to public healthcare spending.