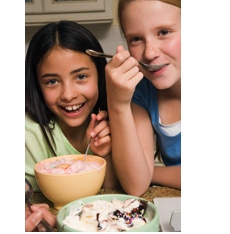 Canadians love ice cream sundaes, according to the findings of a new survey from Smucker Foods of Canada. But, it shows, tastes do differ across the country.

The poll asked Canadians to describe their ideal ice cream sundae. The result is the Oh Canada Sundae – one scoop of chocolate and one scoop of vanilla ice cream, topped with hot fudge syrup, whipping cream, strawberries and sliced banana, served in a waffle cone or bowl.

“Not only did the research help Smucker’s create the Oh Canada Sundae, but we also learned a number of quirky insights, such as British Columbians are the most likely to add a third scoop of ice cream to their sundae (35 per cent), and French Canadians love to share their ice cream sundae (63 per cent)," says Sarah Palter, baking specialist for Smucker Foods of Canada.

Other findings include the fact that 89 per cent of consumers like to top their sundae with syrup, hot fudge being the most popular (38 per cent), followed by chocolate and caramel (29 per cent each). Meanwhile, Quebeckers prefer just fruit on their sundaes, with no other toppings. Some of the more unusual ice cream toppings favoured by Canadians include peanut butter, gummi bears, maple syrup, chips, french fries, pickles and even bacon.

The survey was conducted by Angus Reid Public Opinion between March 31 and April 1, 2010. It included interviews with 1,404 Canadian adults from the Angus Reid Forum panel from across the country.