A survey finds that consumers still prefer Vanilla flavoured ice cream, and premium ice cream and frozen yogurt are categories that are growing

And these are just a few of the quirky and curious flavours of ice cream you can find out there.

For a second year in a row, Vanilla has won the popular vote among consumers in the U.S. as the favourite ice cream.

The finding comes from the second annual survey of International Ice Cream Association (ICCA) member companies, which make and distribute an estimated 85 per cent of the ice cream and frozen dessert products consumed in the U.S.

According to survey participants, the top three flavours are Vanilla, Chocolate, and Butter Pecan, with Coffee, Neopolitan, and Rocky Road tied for fourth place.

And premium ice cream is a top seller, while frozen yogurt has posted a steady increase in demand.

The survey explains that premium ice cream has a lower amount of aeration and a higher fat content than regular ice cream.

It’s no wonder then that nearly 70 per cent of respondents said premium ice cream is the most popular product.

Premium is followed by regular ice cream – which contains at least 10 per cent milk fat – and novelties.  Novelties are defined as separately packaged single servings of a frozen dessert, such as ice cream sandwiches and fudge sticks.

In addition to flavours, the survey also asked about popular additions to ice cream, such as fruits, nuts, candies and other ingredients.

Among companies offering novelties, the ice cream sandwich and ice-cream-on-a-stick tied as the most popular.

Bars, push-ups, four-ounce tubes and mini-cups are also popular products, according to the survey.

Canadians know when they’re being cheated 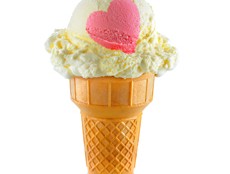