Geneva, Switzerland – Nestlé has announced that it will reduce the salt in all of its food products.

The company says it’s going to accelerate the process of reducing salt in order to support a World Health Organization salt target of no more than five grams of salt per person, per day, by 2025.

The company says it will further reduce salt levels across hundreds of its savoury products including soups, noodles, recipe mixes, frozen and chilled meals and pizzas. That includes its brands Maggi, Stouffer’s, DiGiorno and Buitoni.

In a statement the company goes onto say that all culinary innovations launched will be specially formulated with an even lower level of sodium.

In fact, by 2012 the company’s recipes contained 14,043 fewer tons of salt than in 2005. The company adds that it will reduce salt in its high-sodium product by at least 10 per cent in the next three years.

Nestlé’s gradual approach to reducing salt levels is done to help consumers gradually adapt their taste for salt. And its chefs are constantly looking for different ways of enhancing food with only moderate amounts of salt, for example using spice and herbs to heighten flavours. 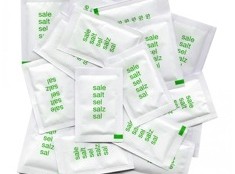