Investment in U-Be-Livin-Smart helps the company and community 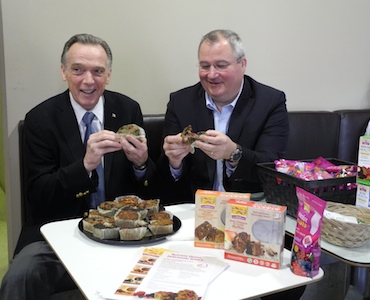 Concord, Ont. – U-Be-Livin-Smart is livin a little easier with an investment from the federal government.

Announced this week, the company, which produces healthy, nutrient-dense foods and other products, received $990,000 from Agriculture and Agri-Food Canada.

The investment will go toward purchasing and installing food processing equipment for the commercialization of the company’s patented nutrient-dense muffins, vitamins and other related products.

U-Be-Livin-Smart says it has been looking for ways to scale up “smartly” and this investment “fits well with our mission to give back.”

In fact, both the company and the federal government say the project will help create jobs and increase demand for berries, apples, sweet potatoes, eggs and whey protein, leading to increased profitability for farmers.

“The more government and the private sector can work together to solve the nutrition crisis we are facing,” says the company on its website, “the better chance we will have to turn the situation around before it’s too late. It was a good day and we are grateful.”

One of U-Be-Livin-Smart’s products is the Karmaffins. The company says they’re considered to be a nutrient-dense food as opposed to an energy-dense food (sometimes called empty calorie food). Nutrient density is a measure of nutrients provided per calorie of food or the ratio of the amount of a nutrient in foods to the energy provided by these same foods.

The products can be purchased online, and are also found in major grocery chains and health food stores in B.C., Ontario and in the U.S.