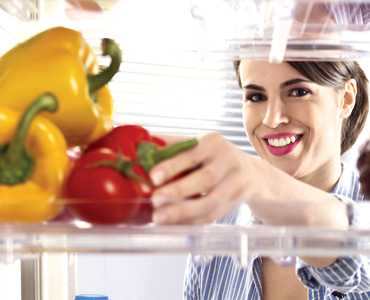 It’s enough to make anyone head straight to the leafy corners of the produce aisle. Yet despite renewed interest in healthy eating — and the scientific proof to back it up — many consumers still struggle to eat enough fruit and vegetables each day. While Canada’s Food Guide recommends that women eat seven to eight servings a day and men eight to 10 servings, women are eating just 4.3 servings and men only 3.5 servings, according to the 2013 Fresh Produce Purchase benchmark study by the Canadian Produce Marketing Association (CPMA).

Why aren’t Canadians getting enough fruit and veg? Kitchener, Ont.-based dietitian Jane Dummer says the challenge for consumers is planning, shopping for and preparing fruit and vegetables. “When I teach my clients to take half an hour and make a stir-fry, they’re not willing to do that, which is really frightening to me,” she says. “It kills me because so many people just don’t know how to put together a meal.”

Dr. Yoni Freedhoff, founder of the Bariatric Medical Institute in Ottawa and author of the popular blog weightymatters.ca, says the “non-use of our kitchens” has been normalized. “Regular home-cooking from fresh, whole ingredients, including fruit and vegetables, has become much less common,” says Freedhoff. “We have been taught that restaurants and boxes can provide us with the health and nutrients we need. So that’s where we look because it is now normal to believe it’s possible to do so.”

While the food processing industry may have a hand in keeping people out of their kitchens, it’s also trying to make it easier for consumers to boost their fruit and vegetable intake. “Our industry plays a very important role in helping Canadians eat a balanced, fulsome diet,” says Maisie Vanriel, vice-president of Scientific & Regulatory Affairs — Food Policy, at Food & Consumer Products of Canada. “From fresh to frozen to canned, there are many different options available for people to include more fruits and vegetables in their diets.”

There are also more stealth ways too. An increasing number of products are now made with “undercover” fruit and vegetables for those picky eaters. For example, in 2012, Canada Dry Mott’s launched a new line extension to its Mott’s Fruitsations fruit snacks: Mott’s Fruitsations + Veggies. The product, which is made by adding various vegetable juices to applesauce, contains one serving of fruit and vegetables (two-thirds fruit and one-third vegetables) in each cup, as per Canada’s Food Guide.

“As manufacturers, we owe it to consumers to be transparent about what’s in our products and at the same time, make sure kids enjoy tasting them,” says Carol-Anne Gower, vice-president of Marketing and Business Development for Canada Dry Mott’s Inc. “On our packaging, we call out what’s good, we call out the serving of fruit and vegetables. I’m not going to say it’s huge, but it’s a lot more than 90 per cent of the other snack options that are out there for kids these days.”

But products like these are not without critics. Freedhoff argues that products containing puréed fruit or vegetable juice are neither fruit nor vegetables. “We allow food manufacturers to suggest that their product is fruit when it was made indirectly from fruit once upon a time,” says Freedhoff. “Evaporated cane juice and concentrated fruit purées are not fruits. These are sugars masquerading as fruit, but promoting themselves as the same as fruit.”

It’s the same story with vegetables. “We’re seeing products now contain one serving of vegetables when the vegetable is just a distant remote DNA relative and not actually the vegetables that we’re talking about in the first place,” says Freedhoff.

Sue Lewis, director of Market Development at CPMA, agrees that many consumers have trouble understanding labelling and the nutrition facts panel. “You have to be careful because you look at some of those products that are supposedly fruit based and you’re hard-pressed to find a fruit on the ingredients list.”

Naturally, CPMA, which represents companies in the fresh produce business, encourages consumers to choose fresh fruit and vegetables. In April, CPMA launched a new consumer outreach program called “Half Your Plate” to help people get their daily fruit and veggie requirements. The campaign is similar to the U.S. initiative “My Plate” that launched in 2007.

“Rather than people counting servings or worrying about serving size, our premise is that at every meal, make half your plate fruit and vegetables. By the end of the day, you’ll have your recommended number of servings,” says Lewis. “That also translates when you’re at the grocery store. Half your cart should be fruit and veggies.”

The program aims to offer a simple, consistent way to help consumers navigate the many different messages out there, from grocery retailers’ own healthy-eating programs to front-of-pack claims, to Canada’s Food Guide recommendations. In 2007, for example, the guide was revised to include the amount of food people need based on their age and gender. “It’s a bit more confusing for some consumers,” says Lewis. “What we hear most from consumers is that they’re struggling with what a serving is in a lot of instances.”

CPMA is also putting a big emphasis on encouraging school kids to eat fruit and vegetables. Its “Freggie” school program includes curriculum that teachers can download from freggietales.ca, as well as Freggie Tales games, jokes and recipes. “Research suggests that sometimes kids need to try things six, seven, eight times before they like it,” says Lewis. “As parents that’s frustrating…but schools are great places for kids to try things. You have that peer support and it’s okay to be eating this if all your friends are eating it.”

Dummer believes the government needs to bring back life-skills training at schools. “Kids are getting to university and think throwing a pasta container in the microwave is actually cooking,” says Dummer. “We need to fund programs for teaching cooking in schools. If parents are neglecting that skill set at home, where are kids going to learn?”

Freedhoff agrees that we should bring back home economics. But he asserts that food manufacturers have no role to play in helping Canadians eat more fruit and vegetables. “The governance of the food industry is profit,” he says. “And that’s not bad, it’s not evil — it’s what a corporation is and does. But the longer we look to food manufacturers to help, so to speak, the longer the problem will persist.”