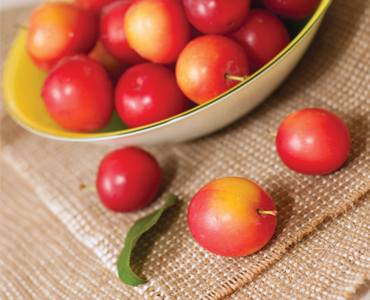 Apricots, peaches, pears, nectarines, plums and cherries. The glorious colours and tastes of summer. And how about those Plumcots or Pluots or Apriums, Peacotums, Mango-Nectarines, Cherry-Plums or Pluerries? These hybrids (or complex hybrids if there are more than two fruits involved) are also in many produce departments, adding a variety that can sometimes stop you in your tracks.

The breeders behind these hybrids — and in vegetables, too — are passionate about what they do. They must be since this kind of work demands a lifetime commitment before you’ll see the, um, fruits of your labour. Floyd Zaiger, the California breeder behind Zaiger Inc. Genetics and the famous Pluot (a plum-apricot hybrid) began work on the hybrid back in the late 1950s, according to his daughter Leith Gardner, and didn’t produce a commercial Pluot fruit tree until 1992.

How does it happen?

It begins simply enough. You dust the pollen from one flower onto the stigma of the other flower. Then the hard part — in stone fruits — begins. You let the flower grow into a fruit and collect the seeds, says Jay Subramanian. The associate professor of Tree Fruit Breeding and Biotechnology at the University of Guelph, who also works at the Vineland Innovation Research Station, says the seeds often take about a year to germinate. Once they germinate, you can plant them in the field where it will take another four or five years before they flower and fruit. Breeders are private about how they work, adds Subramanian, but he estimates they conduct thousands of crosses before they get a decent fruit and seeds they can use.

With vegetables, the process is much shorter because of the plants’ short life spans. Most vegetables, says Subramanian, will go from seed to seed in about a year. Most cucumbers, tomatoes, eggplants and peppers on the market today are hybrids. Green and orange cauliflower are also the result of ambitious hybrids.

So is this type of plant crossing the same as genetic modification? Not at all, says Doug Phillips of Visalia, Calif.-based Phillips Farms, which grows Peacotums (a peach-apricot-plum mix). “[Hybrids] are what you call open cross pollenization. It’s strictly coming from an open cross between a flower and a pollen source,” he says. “You certainly don’t go in and inject a new gene or modify a gene.”

Why does the market need hybrids?

In Leith Gardner’s opinion “you can’t beat a really good [hybrid] plum.” Gardner works at Zaiger Inc. Genetics in Modesto, Calif. with her brothers, extended family and dad Floyd. She adds that hybrid apricots, for instance, are more adaptable and can be grown in different zones. She explains that her father’s motivation when he first began breeding was “to improve the flavour, and to create something new and unique.”

The uniqueness and novelty of these fruits and vegetables does pique consumers’ interest. And although there’s often a premium price attached, many consumers don’t seem to mind.