Fibre and its measurement

Dr. David Mangan looks at changing methods for the measurement of dietary fibre 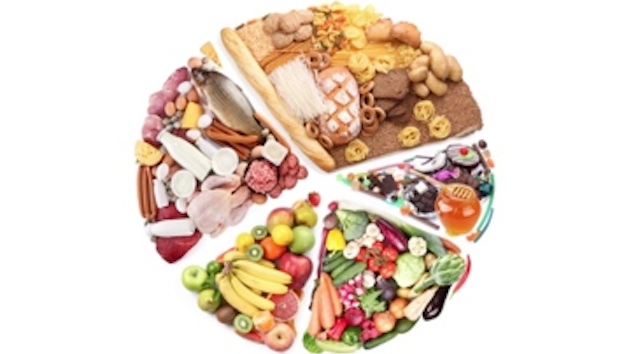 What is dietary fibre?

Dietary fibre can generally be described as that portion of food that is not digested in the human small intestine. It passes into the large intestine where it is partially or fully fermented. This characteristic of dietary fibre is thought to produce a large number of the well-documented health benefits. 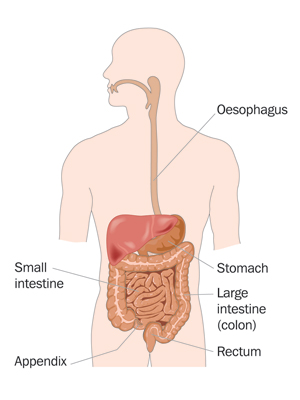 (WHO/FAO) and is the international body that sets guidelines for national regulatory authorities. In 2009, they finally reached consensus upon a definition of dietary fibre after almost 20 years of deliberation:

Dietary fibre denotes carbohydrate polymers(including also lignin and other compounds if quantified by AOAC method 991.43) with 10 or more monomeric units(the decision on whether to include carbohydrates with a degree of polymerization from DP 3 to 9 should be left to national authorities) which are not hydrolysed by the endogenous enzymes in the small intestine of humans and belong to the following categories:

Dietary fibre can be classified in a number of different ways. Bulk properties can, in certain cases, provide useful information:

In its simplest terms, dietary fibre content in a sample is measured in the laboratory by what is called an enzymatic-gravimetric 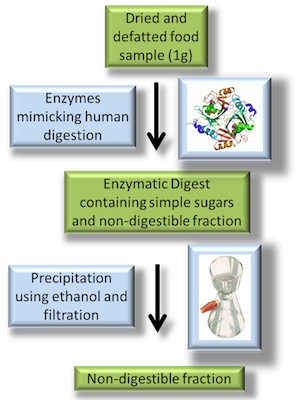 method. After defatting, a food sample is treated with enzymes that mimic the digestive process in the human small intestine. Digestible carbohydrates are broken down into simple sugars and removed from the sample by precipitation using ethanol followed by filtration. This process mimics the absorption of these sugars in the body. The non-digestible precipitate contains the dietary fibre but also contains protein and inorganic material. These should not be included in dietary fibre, so protein and inorganic material must be measured separately and then subtracted from the weight.

Prosky Method (AOAC 985.29) – Introduced in 1985. Uses bacterial α-amylase and harsh conditions (pH 8.2, 100ºC) for the enzymatic incubation step. Most resistant starch and all non-digestible oligosaccharides are not included which results in an underestimation of dietary fibre in many food types. This method does not measure all components of dietary fibre as currently defined by CODEX Alimentarius. 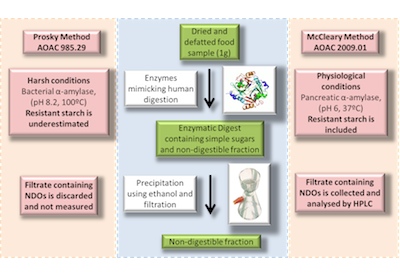 An inherent problem exists with the measurement of dietary fibre by the Prosky/Lee methods (AOAC 985.29/991.43). These methods measure some components of dietary fibre in an incomplete fashion. For example, if AOAC 985.29 is used to measure dietary fibre, galacto-oligosaccharides (GOS), raffinose and stachyose are not measured at all while Polydextrose, resistant maltodextrins, inulin, fructooligosaccharides (FOS), pectin, arabinogalactan and RS are partially measured. This poses a challenge for food science analysts because if, for example, RS is measured using AOAC 2002.02 and the value obtained is added to the value for Total Dietary Fibre measured using AOAC 985.29, this results in a quantity of RS being “double counted” leading to an artificially high value for dietary fibre.

The solution to this problem is to replace the Prosky/Lee methods (AOAC 985.29/AOAC 991.43) with the McCleary methods (AOAC 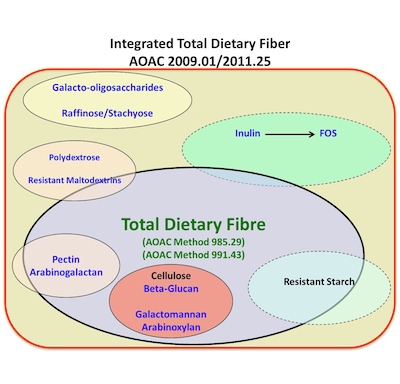 2009.01/2011.25). These methods correctly measure all components of dietary fibre and avoids the problem of double counting.

CODEX Alimentarius published the new definition of dietary fibre in 2009 and since that time, many national and international authorities have moved to redefine their regulations based on this. The European Food Safety Authority (EFSA – regulatory body for the entire European Union), Food Standards Australia and New Zealand (FSANZ), Health Canada and equivalent bodies in China, Brazil, Chile, Mexico, Thailand, Korea, Malaysia and Indonesia have all broadly accepted the CODEX definition and the accompanying analytical method AOAC 2009.01. South Africa is the only country that has decided not to include oligosaccharides with DP3-10 in their definition of dietary fibre, which may prove somewhat problematic in terms of regulation as there is no analytical method available to meet that definition precisely.

In the U.S., the FDA has proposed to also accept the CODEX definition and the accompanying analytical method AOAC 2009.01 (and to reject an analytically unmanageable definition given by the IOM in 2001). The proposed FDA rule change to 21 CFR part 101 will come into effect in 2016.

The UK has traditionally been the only country to use a completely different definition that is based on the use of the non-starch polysaccharide (NSP) method to measure “fibre.” It is unclear at this time whether they will take this opportunity to harmonize with the rest of the world in this regard.

Megazyme is the only commercial supplier of the reagents required to run AOAC 2009.01. These are sold in the form of a kit (Integrated Total Dietary Fiber Assay Kit) which also contains a data booklet clearly outlining the principle of the method and detailed instructions for how to practically perform the procedure in the laboratory.