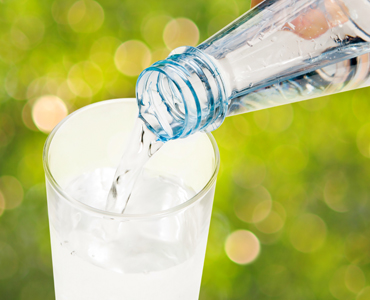 There was a time when water was strictly utilitarian. Available plain (and plain only), it was a thirst quencher — virtuous and uncomplicated. Those days, however, are long gone, as manufacturers, catering to consumers’ thirst for new experiences, are bringing a dizzying array of plant-, fruit- and vegetable-based flavours to market. Previously mousey water is now va-va-voom sexy.

Number one is coconut water, which has been “explosive in recent years” and is “still the market leader,” says Rob Luscombe, grocery/whole body buyer for Whole Foods Market’s Ontario stores. The numbers tell the tale, as coconut water recorded sales of more than $27 million from July 2013 to July 2014, according to a report commissioned by Tetra Pak.

Moreover, the drink — made from the clear, sweet liquid found inside young, green coconuts that is naturally rich in potassium and other electrolytes that are key to rehydration — has been incorporating new flavours such as mango and coconut, says Luscombe. Even orange juice is getting into the act. Witness Simply Orange with Coconut Water, which hit the market this past March.

One of the first brands to introduce coconut water to the Canadian market, the Grace line, made by Kingston, Jamaica-based GraceKennedy, is now introducing a carbonated version. Grace Sparkling Coconut Water will be available in Original and three fruit-infused flavours – lemon, pomegranate and mango – and joins the company’s pure coconut water and the version containing pieces of young coconut.

But coconut water is just the tip of the iceberg. “Consumers are seeking novel tastes, especially when replacing products which may have had the same flavour profiles for years,” says Amy Visser, senior market consultant at Zenith International, a U.K.-based consultant to the food and drink industries. “Thanks to social media, consumers can respond directly to companies and this is having an effect on the market.”

To that end, “consumers have reached out through social media to ask Clearly Canadian to bring back its flavoured waters, which left the market in 2009,” says Visser, who adds that more than 30,000 cases have already been pre-sold in blackberry, cherry, peach and raspberry.

Besides ready-to-drink products, water-enhancer super concentrates “are growing in popularity as well,” says Visser. Coca-Cola’s Dasani has introduced Dasani Drops, “with familiar favorites such as pink lemonade, mixed berry and grape, but also cherry-pomegranate. We can expect to see additional flavours and new market entrants as this category heats up.”

Visser notes that “consumers remain particularly price-sensitive and that is a constraint. Taste is foremost and reduced calorie content is also a factor. There is a smaller segment seeking to avoid artificial sweeteners and those consumers have the choice of sugar-sweetened or unsweetened flavoured products. While standard fruit flavours can be expected to prevail, we expect to see continuing innovation in the coming years. Nestlé Pure Life offers sparkling varieties in lemon, lime, black cherry, mandarin-orange and raspberry-lime, as well as more novel combinations such as mango-peach-pineapple plus still acai-grape.”

Closer to home, the healthy water category is “doing quite well,” driven by consumers looking for functionality in drinks “as people shy away from popping pills to get vitamins and minerals,” says Luscombe. He adds that some newer players, such as maple and birch, are increasing the overall size of the category and giving consumers more choice.

“Maple, and maple water, are among the trendiest new flavours,” says Anton Angelich, group vice-president, Marketing, at Virginia Dare, a Brooklyn, N.Y.-based manufacturer of flavours and concentrates. He adds that maple has “very positive health associations with its natural minerals and electrolytes. There is growing consumer interest in maple water stemming from the launch of a number of maple water beverages in Canada and New England.”

Canadian brands include KiKi Maple Sweet Water, made by Arthur, Ont.-based Troll Bridge Creek. Introduced in 2010, KiKi is made from filtered, pasteurized maple sap provided by a London, Ont.-area sugar bush. KiKi offers plain maple as well as blueberry, cranberry and strawberry versions. Sapsucker Maple Tree Filtered Water, brought to market in May and made by Lower Valley Beverage Company, based in Flesherton, Ont., is sold in the Tetra Pak format, which offers longer shelf life, according to the company’s website. And from Quebec comes De L’Aubier, manufactured by Eau Matelo, based in Montreal’s Lasalle suburb. Suitable on its own or as a palate cleanser during meals, De L’Aubier is made from the 85-per-cent water content filtered out of sap during syrup production (maple farms in Mirabel and Bromont, Que., supply the water).

Syrup made from yacon (also known as the Peruvian ground apple), a juicy edible tuber that is low on the glycemic index and contains prebiotics and antioxidants, sweetens the Yacon Water line introduced at Whole Foods in April 2014. Distributed by Canadian company Ecoideas, the Yacon line includes varieties such as pomegranate, mango, lemonade and cranberry-green tea.

On the plant-water front, Aloe H2O, made by Denton, Texas-based Lily of the Dessert, launched in September 2014. Carried by Whole Foods, the waters contain two ounces of aloe, taken from certified organically grown plants, which aids digestion and offers immune-system support and anti-inflammatory properties, according to Jack Brown, vice-president of Sales and Marketing. Flavours include Pure (cucumber), blueberry-pomegranate, peach-mango and coconut-lime.

On a more exotic note is Caliwater, made from prickly pear cactus fruit (wild-harvested in the California desert) containing betalain antioxidants offering skin-enhancing benefits and delivering five naturally occurring electrolytes, according to the company.

In June, Virginia Dare introduced a line of banana concentrates in two styles: “clear, thirst quenching, made with clarified banana juice concentrate” (flavours include banana cream, pineapple-banana and chocolate-banana) and “juicy, made with banana purée and pear juice; naturally cloudy” (flavours include raspberry-banana and strawberry-banana), according to a company promotional sheet. “Banana water takes advantage of the consumer’s knowledge that bananas are a good source of potassium, and this makes this concept a desirable rehydration beverage,” says Angelich.

Beyond banana, “trendy flavours that lend themselves to ready-to-drink fruit- and plant-based beverages include tea, sour cherry, blueberry, raspberry, strawberry-rhubarb, pumpkin and ginger,” adds Angelich. “Blueberry and raspberry are favourites and familiar among consumers, have great aroma and taste, and have many positive health associations. Strawberry-rhubarb is an old-fashioned comfort-food flavour with a certain specialness and uniqueness to its taste.” Virginia Dare also recently introduced offerings in organic black and green tea concentrates, as well as matcha tea.