Growth in the half-billion dollar bottled water category flat lined in 2008 after double-digit annual sales gains since 2000. According to The Nielsen Company, flat water volume was unchanged at 1.98 billion units for the 52 weeks ended Nov. 22 after 15 per cent in 2007, this despite a three per cent decline in the value of sales to $481 million through national grocer banners, drug stores and mass merchandisers.

Leading Brands of Vancouver attributed a portion of its 27 per cent decline in revenues to lower water sales in Canada as well as a tougher U.S. market and losses on currency conversions from Canadian to U.S. dollars. Nestlé S.A. of Vevey, Switzerland a world leader in bottled water (Poland Spring, Nestle Pure Life, Perrier), reported an eight per cent decline in revenues for its Nestlé Waters business to $8.43 billion for the nine months ended Sept. 30. Adjusted for acquisitions and divestitures, organic growth was down one per cent but substantially more in markets such as Canada as sales in emerging markets rose 20 per cent.

Nestlé CEO Paul Bulcke noted the slowdown of the bottled water category in Western Europe and North America is “due to a combination of economic conditions and perceived environmental issues around bottled water.” 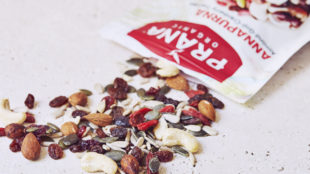