Bring on the Funk

The fermented food movement is taking off, as consumers seek bolder, nutrient-packed ingredients 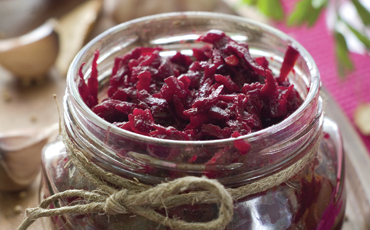 For some Canadians, the term “fermented food” calls to mind Grandma’s vinegary sauerkraut served straight from a mason jar. But thanks to fresh takes on this ancient food-preservation technique, consumers are discovering a bold new world of funky, fermented flavours.

“People are realizing that fermentation is important – there is a reason we used to do it as a way to preserve food and it offers so many health benefits,” says Jenna Empey, co-owner of Pyramid Ferments in Prince Edward County, Ont., an artisanal business that makes a variety of raw, live fermented foods, as well as kombucha, a fermented tea beverage. “It’s a different approach to food and there are so many interesting and innovative things you can do with it.”

But even traditional varieties of fermented foods pack a pungent, zesty punch, which appeals to the maturing palate of today’s consumers. According to Packaged Facts’ 2014 Fermented Artisanal Foods report, heightened consumer interest in bolder flavours is contributing to the increased popularity of fermented foods. “Fermented foods have found a rising tide of popularity due to the convergence of this desire for spicier, bolder flavours and a growing focus on global foods that represent authentic preparations,” noted David Sprinkle, research director, Packaged Facts, in a press release. “It’s the perfect storm, so to speak, for propelling globally inspired fermented artisanal foods into the mainstream.”

While kimchi, a traditional Korean fermented-vegetable dish, is already quite popular, bold fermented sauces and seasonings are also gaining traction, says Garth Mercer, director of national accounts at Korea Food Trading, a Canadian importer and distributor of major Korean food brands that targets both Asian and non-ethnic consumers. “With the mainstream population taking very well to things like Huy Fong Sriracha, many are looking to other Asian sauces and seasonings to enhance the flavour profile of their foods,” says Mercer. These include, gochujang, a fermented hot pepper paste; doenjang, a fermented soybean paste; and ssamjang, a mix of fermented bean paste and red pepper paste.

An increased focus on digestive health is also putting fermented foods – particularly lacto-fermented foods – in the spotlight. Lacto-fermentation naturally preserves food without the use of vinegar, sugar or pasteurization. These live cultured foods are packed with beneficial probiotics, digestive enzymes and nutrients that aid digestion. Packaged Facts notes that the probiotic goodness of foods such as kimchi, lactic-acid fermented craft pickles and miso in particular are appealing to those looking to boost digestive health.

Aside from the health benefits, many people are gravitating towards fermented foods simply because they taste good, says Robert Belcham, chef and owner at Vancouver restaurant Campagnolo. “It all starts with how it tastes and a lot of fermented foods are absolutely delicious,” he says.

Belcham has been making fermented sausages for the better part of a decade, coinciding with the charcuterie trend that has swept restaurants across the country. “Fermenting meat is like the holy grail of fermentation because it’s very difficult to do properly,” he says. “But when it’s done properly, it’s an amazing product.”

Toronto restaurant Borealia, which draws inspiration from the historic foods of Canada’s First Nations, early settlers and immigrants, also makes house-cured meat. For its popular Bison Bresaola dish, the meat is inoculated with a mould called Bactoferm 600, which grows around the exterior of the meat. “[The mold] protects it from light and causes it to age a little bit slower, but at the same time gives it that nice salumi flavour,” says chef and co-owner Wayne Morris. “People really like that one. A lot of people don’t realize it’s mould on there. But whether you’ve been eating [cured meat] your whole life or even trying it for the first time, if it’s good, it’s good.”

In its report, Packaged Facts notes that chefs and consumers are also taking a deeper culinary dive into umami – the salty, savoury taste profile also known as the fifth taste. That means fermented ingredients like fish sauce, dried shrimp and shrimp paste are seeing larger roles as ingredients in restaurants.

“Fermentation gives foods a bit of a funk, but it also gives it that umami flavour,” says Alan Liu, general manager of Toronto restaurant Linda Modern Thai. Liu notes that fermented foods like shrimp paste, fish sauce and yellow bean paste have long been a core part of the Asian diet. But unless someone grew up on some of the funkier flavours, they typically don’t go full bore with using these ingredients. That’s changing, says Liu. “In the past, when we used shrimp paste, we would have to dial back a bit so it wasn’t as overwhelming,” he says. “Now, we are starting to use more of it and introducing some of the funkier smells. We’re not quite at the point where we can have a free hand, but it’s getting there.”

Liu credits the shift in part to New York chef David Chang, founder of the Momofuku group of Korean-inspired restaurants. Chang also developed a fermentation test lab and production facility called Kaizen Trading Company, which experiments with Old World fermentation techniques on non-traditional ingredients (for example, Bonji sauce is made with fermented grains instead of soy). “David Chang has brought Korean fermented foods to the forefront and people are engaging in this new approach,” says Liu.

While funky fermented flavours are largely the domain of restaurants and specialty retail stores, fermented foods are well on their way to having mass appeal. Pyramid Ferments’ Empey says that as more small fermentation companies start to pop up, we’ll start to see more products on grocery store shelves.

And she believes the resurgence of this Old World food-preservation technique is more than just a trend. “Fermentation is a movement,” says Empey. “It’s an old way of preserving food and it was forgotten for a number of decades. But when people put something so far away, they eventually come back to it.”