From sharper flavours and smaller portion sizes to “cleaner” ingredient lists, Food in Canada explores the latest trends in the world of ice cream and frozen treats 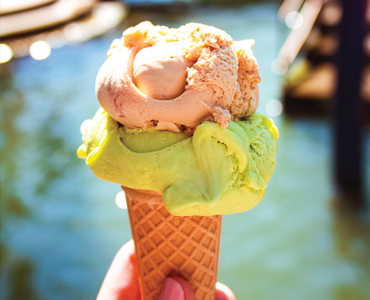 As the weather warms up and the sun starts shining brighter, many Canadians are happily treating themselves to that ice cream cone, frozen yogurt, popsicle, or some other type of fun and tasty frozen treat. But as consumers are becoming more concerned about overall health and wellness, it seems they’re also becoming a little more choosy about the types of frozen goodies they consume.

“While ice cream remains a treat, consumers are looking for more permissible options such as items with lower calories, less sugar and portioned sizes,” explains Jane Mackasey, vice-president – Ice Cream, Marketing, at Nestlé Canada. Recently, for instance, Nestlé reduced the added sugar content in several of its products aimed at children, such as the Lifesavers popsicles, Itzakadoozie pops and the Smarties 1.5-L tub of ice cream, as part of its goal to make sure all children’s products contain no more than 11 g of added sugar per serving.

At the same time, “cleaner” ingredients are definitely coveted by Canadians who are becoming more and more discerning about what they put into their bodies. “Consumers are looking to the ice cream category for a great tasting treat, but are also looking for options that they can feel good about consuming,” says Mackasey. “Products with clean and simple ingredients, as well as fewer artificial colours and flavours are popular.” Nestlé’s Häagen-Dazs line, with its focus on high-quality simple ingredients, fits with this trend – it’s becoming increasingly popular, according to Mackasey, and people seem to have no qualms about paying that little bit extra for the premium quality.

Kawartha Dairy Ltd., an ice cream manufacturer based in Uxbridge, Ont., also enjoys the upside of the growing consumer

desire for good old-fashioned recognizable ingredients. “The fact that we’re smaller, and we’re from a rural area, people see us as old artisan-type ice cream makers,” says Blake Frazer, vice-president and general manager of Kawartha Dairy. That said, Frazer says Kawartha doesn’t claim to be “all natural,” as there are certain stabilizing ingredients (such as guar gum or carageenan) that do need to be included in order to stabilize the ice cream so it can be transported to retail locations and still maintain its quality.

Still, the basic formula for Kawartha’s ice creams essentially hasn’t changed since the 1950s, says Frazer: “We call it making it the old-fashioned way…Our ice cream has 15 per cent butterfat in it, and most ice cream has 10 per cent, so it’s very creamy. That’s the big feature of it – when people try our ice cream, they just get an incredible mouth feel because of the amount of cream in it.” And while he can’t say for certain that it’s because people today are seeking that old-fashioned goodness, Frazer says that sales at Kawartha have definitely been showing very strong growth in recent years. “Over the last four or five years, we’ve enjoyed double-digit volume growth in percentage terms,” he says.

At the same time, while consumers are certainly looking for old-fashioned, pure and simple-style ice creams, they’re also craving innovative and exciting new flavours. Frazer says Kawartha tries out a few new flavours each year, based on inspiration gained from trade publications, competitors’ offerings and the U.S. marketplace. “Last year, for example, a huge success for us was a new ice cream we launched called salty caramel truffle,” he says.

“People are trying chili in ice cream, and hot sauce…very different types of flavours. People are really looking for ‘different’ these days,” adds Tracey. “I don’t know how successful these types of flavours will be in the long term, because everyone ultimately always goes back to their old standard favourites…but certainly as a little growth niche market, [ice cream manufacturers] are coming up with the chili-chocolates, the gingers – those new and innovative flavours that add a little bit of zing.”

Another trend has to do with decadent products being offered up in smaller package sizes. In the ice cream world, Nestlé’s Häagen-Dazs line is well known for its smaller 500-mL tubs, for instance, and other ice cream manufacturers really seem to be following suit. “The 500-mL packaging for ice cream has really taken off,” says Tracey. “You can see it in the stores; there are quite a few ice cream players out there messing around with 500-mL packaging. We haven’t gotten there yet, but we are planning to put out a 500-mL package out there, if not this year then next year.”

At Markdale, Ont.’s Chapman’s Ice Cream, they’re using a similar philosophy – offering decadent options in smaller portion sizes – for some of their frozen treats. As part of Chapman’s Premium Canadian Collection line, for instance, the company offers a selection of chocolate-dipped ice cream bars that are certainly tasty and indulgent, but smaller in size than the standard larger-size ice cream bar. “We have a 55-mL bar format, as opposed to the 88-mL super-indulgent bar,” explains Mary Breedon, Sales and Marketing manager at Chapman’s. “If someone says I want to have a treat, they are likely looking at something indulgent. What we’re offering is that indulgence in a smaller portion size.” With a number of varieties to choose from, including Almonds & Milk Chocolate, Creme Caramel & Toffee, and Double Dark Chocolate, as well as several varieties of Chapman’s new “Bumpy Bars” that are filled with chunky inclusions like brownie pieces or pralines throughout, these smaller-size ice cream bars aim to satisfy that desire for a little indulgence without the guilt that often comes with overindulging. “And with eight in each box, the whole family can share,” adds Breedon.

Using that same philosophy, Chapman’s also recently launched something called the Stickwich. The product originally started out as two cookies with ice cream in between, completely enrobed in chocolate, and 125 mL in size. “People were saying, ‘wow, that’s really big. I can’t eat that very often,’” says Breedon. So they decided to trim it down to just one cookie, “then we made it only half-dipped in chocolate – so not quite as indulgent – with a stick stuck in the middle, like a lollipop.” Now at 80 mL, the Stickwich is still not exactly a low-cal treat, but it is certainly smaller and less overwhelmingly decadent.

Chapman’s also launched its Flavours of the World Gelato line this year, which actually reflects two of the prevailing trends: the desire for healthier options (the gelato is 25-per-cent less fat than Chapman’s premium ice cream) and the desire for innovative and exciting new flavours. The six internationally inspired flavours include Amaretto Biscotti, Sticky Rice & Mango, and Sour Cherry Tango. “So it’s still along that healthy trend, with a lighter mouth feel,” says Breedon, “and it’s definitely something different to entice the palate.”