Toronto – At a seminar in August, Brenntag Canada and ICL Performance Products LP unveiled an ingredient for the bakery industry.

The ingredient is ICL’s leavening acid Levona, a Calcium Acid Pyrophosphate, which was launched in the U.S. in 2006, but only recently approved by Health Canada.

What makes Levona interesting is that it’s part of a family of leavening agents that provide controlled release and targeted rate of reaction.

It also happens to be rich in calcium and has zero sodium.

ICL told an audience of baked goods manufacturers that Levona can create finished products that are tender with uniform cell structure, a clean flavour profile and ideal volume.

The Levona leavening acids are well suited for use in a wide variety of baked goods including those that are targeted for health benefits or consumer-convenience, including:

The Levona family of calcium acid pyrophosphate products can also be used in bakery applications such as bread, buns and rolls, pizza crust and tortillas as dough conditioners, also known as dough improvers or enhancers.

Levona helps to align the proteins in wheat flour, glutenin and gliadin, to form gluten. Gluten is responsible for gas retention in both yeast-raised and
chemically leavened baked goods.

Baked products formulated with Levona may be able to incorporate healthy messaging, such as “low sodium” and “a good source of calcium” – without compromising flavour, volume, texture or convenience.

Sodium is believed to contribute to heart disease, high blood pressure and stroke. The reduction of sodium content is one aspect of healthier products,

With zero sodium, Levona does not add to the overall sodium content of a baked good – in some applications it can deliver up to as much as a 25 per cent reduction in sodium.

Levona also provides a significant source of calcium, allowing potential claims for bone health or reduced risk of osteoporosis. Calcium is a mineral of focus due to its implications in bone health, cholesterol reduction and cardiovascular health. 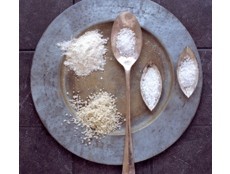