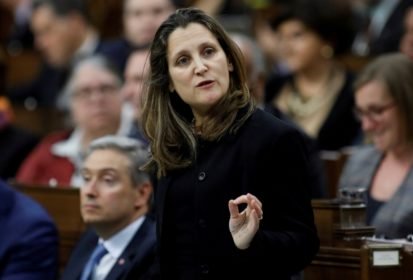 Ottawa | Reuters — Canada’s Parliament rushed through ratification of the new Canada-U.S.-Mexico (CUSMA) trade pact on Friday March 13 before taking a three-week break to help stop the spread of the coronavirus, a top government official said.

Canada was the last of the three signatories to formally adopt the pact, prompting congratulations from the United States and Mexico.

The House of Commons lower chamber, which had weeks of deliberations left, agreed the instant approval on March 13 after opposition legislators dropped their objections. The upper Senate chamber backed the pact later in the day, Deputy Prime Minister Chrystia Freeland told reporters.

“(This) was entirely within the power of Canadian legislators to do, something we were able to do to help the Canadian economy at this challenging time, and I would like to thank legislators from all parties,” she said.

CUSMA was designed to replace the North American Free Trade Agreement (NAFTA), which U.S. President Donald Trump strongly opposed on the grounds it had cost hundreds of thousands of American jobs.

“Now that the USMCA has been approved by all three countries, an historic new chapter for North American trade has begun,” U.S. Trade Representative Robert Lighthizer said in a statement, referring to the same pact by a re-ordered name.

In a letter to the U.S. Congress on Wednesday, Lighthizer sent notice of an in-force date of June 1 for CUSMA, according to a spokesman for the Senate finance committee, which oversees tax and trade issues.

Mexican President Andres Manuel Lopez Obrador said the approval was good news for Mexico at a time of economic and financial instability.

“With the Parliamentary suspension due to the spread of COVID-19, Canadian beef producers are grateful to all Parliamentarians for working together” to pass the bill, Bob Lowe, president of the Canadian Cattlemen’s Association, said in a statement Friday.

The CCA noted the bill continues “reciprocal duty-free trade” between the signing countries and includes a section “highlighting the commitment to not disrupt trade through labelling” — a reference to mandatory country-of-origin labelling (COOL) legislation which the United States put in place in 2009 and scrapped in 2015 under threat of retaliatory tariffs.

CUSMA also provides for improved market access by way of increased quotas for refined sugar and sugar-containing products, as well as gains for some oilseed products, CAFTA said.