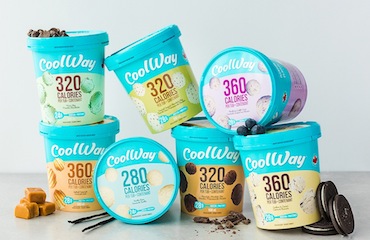 The company says each scoop of CoolWay has the same taste as regular ice cream but with less sugar and more protein.

Each 500-mL container of CoolWay has 28 grams of protein and has 50 per cent less sugar than traditional ice cream. With less than 360 calories per container, CoolWay is also gluten-free, vegetarian friendly and made in a peanut-free facility.