A Nanos Research poll conducted on behalf of the Agriculture Union, a wing of the Public Service Alliance of Canada representing government meat inspectors, found that the majority of Canadian consumers want government to step in and play a much more active role to ensure food safety because they don’t trust industry to do the job.

The survey found that seven in 10 Canadians believe Ottawa should invest more resources and be more hands-on in policing the safety of food, while one in five believe the government should rely more on the food industry to police its own safety processes.

The survey also found that only four per cent of Canadians have a high level of trust in food companies to assess themselves when it comes to compliance with safety rules.

In view of last year’s listeriosis outbreak, the survey found that:

• 64 per cent of Canadians either blame the government for turning over critical inspection duties to industry or business for cutting food safety corners to save money.

• only 27 per cent subscribe to the view that the outbreak was simply an unfortunate and unavoidable accident.

And other results include:

• 73 per cent think the government should take the lead role in ensuring food safety standards are met.

• only 18 per cent think food business can ensure food safety standards are met for the foods they produce.

Nanos Research conducted a random telephone survey of 1,001 Canadians, 18 years old and over. 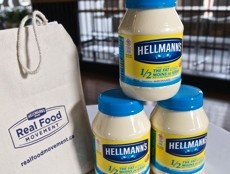