Steve Toms, of Fortinos Hamilton took home the title of Ontario’s Finest Butcher (OFBC) in a competition hosted by Meat & Poultry Ontario (MPO) on Monday. Toms, a 2-year veteran to the competition, earned the honour after a fierce head-to-head meat cutting battle with finalists Dave Vander Velde of VG Meats, Stoney Creek and Frank DiGenova of Butcher by Nature in Toronto.

“This year has shown us more than ever the importance of your local butcher.” says Franco Naccarato, MPO’s executive director. “There is a great need for trained butchers across Ontario and we hope this competition can elevate and give the profession the recognition it deserves.”

The Ontario’s Finest Butcher competition was started seven years ago to showcase the profession and recognize the level of skill found in butcher shops and meat plants across the province.  Twelve competitors from across Ontario faced off in an elimination round (held on September 14) to determine the top three finalists. During this round they were given 30 minutes to transform a fresh pork bone-in leg, bone-in butt, and bone-in loin, into merchandisable cuts of their choice, and were judged on the degree of difficulty/efficiency and skill level in boning, trimming and cutting, primal cut utilization and financial performance. The top three moved on to the finals where it was still about skill, but creativity and consumer-appeal were added to the judging criteria.

The theme for this year’s final ‘black box’ round was ‘Deja Food’ and Toms along with fellow finalists had 30 minutes to transform two ducks, a leg of veal, and a pork bone-in loin, to prepare several remarkable-looking, display-ready items. The three judges combined scores determined it was Toms that would carry the honour.

“It’s an amazing honour to represent Fortinos and artisans from Ontario in a skilled trade that is now starting to come back to the limelight.” says Ontario’s Finest Butcher winner Steve Toms. “Great work by Meat & Poultry Ontario on organizing a competition to inspire more people into this trade for years to come.”

ABOUT MPO
Meat & Poultry Ontario (MPO) is the representative voice of Ontario’s meat industry. Our members are independent businesses proud to serve the communities they live and work in. The association is comprised of meat and poultry processors, wholesalers, and retailers; industry suppliers; and not-for-profit organizations that support MPO’s objectives. Ontario’s meat and poultry sector employs 25% of Ontario’s food and beverage processing industry — the single largest manufacturing employer in Ontario — and generates $8.8 billion of the province’s $42 billion food and beverage processing industry revenue. 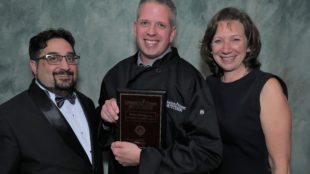 The Best of Ontario Meats