Chicago – Fresh greens can easily harbour dangerous microbes, no matter how hard salad producers have tried to prevent that.

But, reports National Public Radio (NPR), a scientist at the University of Illinois may have found a way – with a spinach “spa” that zaps dangerous bacteria with ultrasound.

NPR explains that ultrasound is nothing more than sound moving at a frequency too high for humans to hear. It’s mainly used for medical tests.

If you turn up the intensity, however, an ultrasound can be powerful enough to destroy bacteria.

The story reports that ultrasound is increasingly being used in food production and has been used successfully to decontaminate other fresh foods, such as apple juice.

But using ultrasound on greens has had only mixed success.

Feng built the spinach spa and explains that if you zap a spinach leaf too hard, it can develop watery spots and rot. Zap it too little, and the germs live.

“We need to be very careful. We don’t want to damage this produce,” he says.

A spinach leaf, although it’s delicate, can also block ultrasound waves from reaching bacteria behind it.

Feng tried to overcome these problems by submerging the spinach in a big trough of water, much like the tanks used to wash fresh greens for commercial production.

He added Jacuzzi-like jets to move the water, so all the spinach gets exposed to about the same amount of sound waves. And he used transducers that were as deep and long as the tank to generate sound waves throughout.

As the sound waves move through water, they make areas with high and low pressure. That creates tiny cavities that pop like bubbles.

That cavitation process can dislodge and destroy bacteria – or it can destroy the spinach. So Feng had to tweak his machine to cause just enough cavitation, but not too much.

Then he combined ultrasound and a time-tested industry technique – washing fresh greens in a solution of chlorine and water.

That resulted in a tenfold reduction in E. coli, compared to a chlorine wash alone. The results were reported in the journal Innovative Food Science and Emerging Technologies.

Feng is confident he could invent a machine that would work on a commercial scale, but it would cost more than the chlorine-only treatment many processors use now, and so far no one’s expressed interested in funding commercial development of his spinach spa. 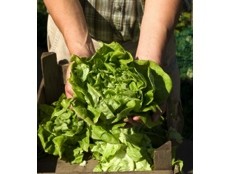