Catelli teams up with Canadian chefs for fundraising cookbook

The initiative is part of a national campaign called Help Us Feed the Hope, in support of Canada's food banks 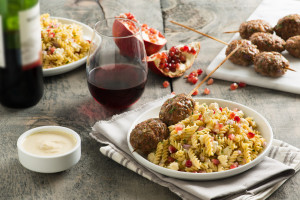 Some of Canada’s top chefs have come together to create 15 mouth-watering family-style recipes that incorporate the season’s trending ingredients: think exotic Mediterranean flavours, ancient Indian spices with a modern twist, Calypso beans and pulses, and “ugly vegetables” such as cauliflower, jicama and rutabaga.

The recipes are featured in a new digital cookbook, called Pasta to the Rescue: Hot Summer Dishes for Busy Families, sponsored by Catelli Foods in support of Canada’s food banks. The cookbook is available for download free of charge at www.catelli.ca or on the Catelli Facebook page (www.facebook.com/catelli‎).

This initiative is part of a national campaign by Catelli Foods called Help Us Feed the Hope. For every download or share of the cookbook or recipes, Catelli Foods will donate servings of pasta to Canada’s food banks. Visitors to the Catelli Foods website will also have the opportunity to enter a draw with a chance to win one of three pasta dinners cooked at home by one of the participating chefs.

The campaign also features a national in-store promotion in which Catelli Foods will donate a serving of Catelli pasta to food banks nationally for every box of pasta purchased through to the end of May. Participating retailers include Sobeys and Metro stores in Ontario, Sobeys stores in Eastern Canada, Super C, IGA and Metro stores in Quebec, and Federated Co-op stores in Western Canada.

“Summer is a time when the stock at food banks is at its lowest – a fact many people don’t realize – so this initiative couldn’t come at a better time,” says Ryan Noble, executive director of the North York Harvest Food Bank in Toronto. “This pasta will go a long way in helping to provide the thousands of families who use the food bank with enough food this summer.”